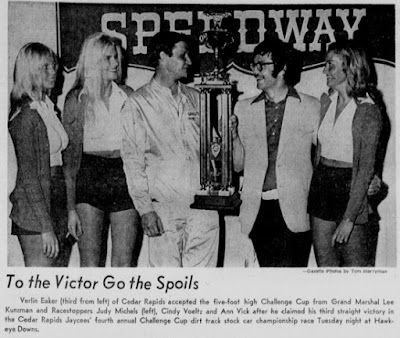 Whatever, Verlin Eaker continued his habit in the Iowa Challenge Cup stock car championship race by capturing the 4th annual classic Tuesday night at Hawkeye Downs before a crowd estimated at 6,000.

Eaker and his 1972 Nova led the final 29 laps of the 50-lap feature on the half-mile dirt track, en route to claiming his third Challenge Cup in a row.

The Cedar Rapids pilot also pocketed the lion’s share of the record $7,000-plus purse offered by the sponsoring Cedar Rapids Jaycees.

Mindful that winning just one Challenge Cup “is nice”, Eaker said “winning three of them in a row gives me a great feeling. From where I started, I didn’t think I had a chance.”

“Other cars may have as much horsepower, but I think we out-chassised them tonight. Really, the car was working so good it made it look easy.”

Eaker started eighth in the 18-car field. But he was up to third by the ninth lap and had moved into second by the 11th tour.

Ron Weedon of Pleasant Valley was the man to catch at that point. By virtue of his top clocking of 25.51 seconds in time trials, he had earned the pole position and was setting a fast pace for the first 12 laps.

But on the 13th tour, Eaker and the rest of the field got a break when the second and final red flag allowed them to close on the restart. From that point on, Eaker was right on the bumper of Weedon’s 1973 Chevrolet.

By the 19th lap they were dueling wheel to wheel and were in a dead heat at the finish of lap 21. Eaker took Weedon on the backstretch of the next lap and six laps later Weedon was forced to drop out of the battle with a broken A-frame.

Eaker said the last restart was what he had hoped for. “I thought if I could close the gap and keep the pressure on him (Weedon), he’d make a mistake,” Verlin explained.

“I didn't think he could last the full 50 laps at the pace he was going.”

The restart also enabled Eaker’s crew to make a significant change during the lull.

He explained, “The nose had been pushing, so we took some weight out of it. We changed the wedge and then the car started drifting evenly.”

Eaker was not pressed after Weedon dropped out, but there was a jam-up battle for second place between Darrell Dake of Cedar Rapids and Ed Sanger of Waterloo.

In fact, they had gone at it for the entire race. Dake led from lap 38 until Sanger took over on lap 46. But Darrell and his 1972 Nova came right back on the ensuing lap to regain the number two spot and he stayed there the rest of the way.
Second-place money was worth $650, while Sanger picked up $550. Bill Zwanziger of Waterloo and Bill McDonough of Cedar Rapids rounded out the top five. McDonough is the Challenge Cup’s only other winner, having taken the initial race in 1971.