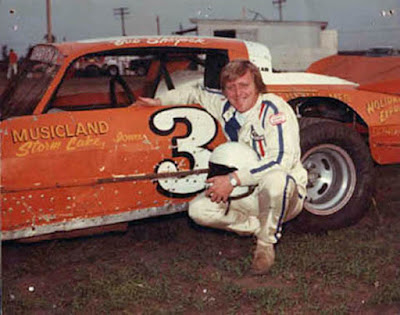 Fairmont, Minn. (June 2, 1975) - "Luck plays a lot of different games in racing," commented Estherville, Iowa, racer Bob Shryock as he headed for a night of auto racing Saturday at the Fairmont Speedways.

"It takes more than just steering a car down the speedway. You have to be at the right place at the right time and your equipment has to hold up. If you haven't got Mr. Luck with you, you just don't have anything going for you."

Mr. Luck rode part way with Shryock on Saturday night. He had a tough time winning his first heat. Dave Knox of Wabaso, Minn., passed Shryock at one time and appeared to be heading for a sure victory. But on the last lap, he developed mechanical problems and had to drop out of the race. Shryock went on to win the heat.

Mr. Luck appeared to be riding with Shryock at that point, but in the second race Shryock developed mechanical problems of his own and had to drop out. Dropping out hurt Shryock and it also hurt his pit crew. Neither gave up easily.

“I have a great pit crew," commented Shryock on his way to the races. "If I win tonight, there will be some celebrations. But if something goes wrong with the car, they will head right back to Estherville and start tearing the car apart yet tonight."

Members of Shryock's pit crew include Barrel Tonderum, who has been with him since Shryock began racing when he was 21; Richard Paplow and Bobby Harris, both who have been with him for three years and Laverne Mine, who is in his first year as Shryock's mechanic. True to Shryock's prediction, all returned immediately to Estherville to find out what the trouble was with the car.

They began work about 10:30 p.m. and shortly after midnight, the trouble was found. . . a cracked cylinder wall.

Shryock started racing when he was 21 but had to give it up for about three years. His first year he was in a serious accident and his car was totally destroyed. It took him three years before he could get enough money together to race again. He has had three cars, a 1957 Ford, a 1968 Camaro and currently he is driving a 1975 Monte Carlo. He purchased his present car in Waterloo for $5,500 and spent an additional $3,000 for the engine. If Mr. Luck rides with him, he figures he will win that money back in about two years.

Shryock admitted to a certain degree of nervousness. On the way to Fairmont, he pointed to a couple packs of cigarettes on his dashboard. "I'll smoke both of those before the night is over," said Shryock. "But once the flag is dropped, I won't be nervous anymore."

Shryock is married and has three children. His wife commented on what it is like to be married to a racer.

"A lot of people ask me why I let my husband do something that he could get killed doing," said Mrs. Shryock. "I'm not God, and I can't tell if he is going to die racing or not. Death doesn't enter my mind." Then she added softly, "At least if he dies car racing, I'll know that he died happy."

Shryock says he feels safer on the race track than he does driving the family car down the highway. He points to the fact that racers have special safety equipment and everyone is going the same direction, leaving little chance for a head-on crash. He said the impact of a head-on crash between two cars going 55 miles per hour would be greater than rear-end crashes of two cars going 100 miles per hour.

His racing circuit this summer includes Cresco on Friday nights, Fairmont, Minn., on Saturday nights and Alta on Sunday nights. He may substitute Harlan for Alta before the season is over because Harlan is paying more to winners than Alta.

In the past, he has also raced at tracks at South Sioux City, Neb., Omaha, Neb., Rapid City, S.D., and in Florida, Illinois and Wisconsin.

A few years ago, the family decided to take a vacation in Florida; Shryock took his racer with him and won enough money to pay gas and expenses on the trip.

His biggest personal win was winning the Black Hills Grand National at Rapid City, S.D., where he won $1,800. That was in 1973 and that same year he won the point title at Alta and came in third in point totals at Fairmont, Minn. That was his best year.