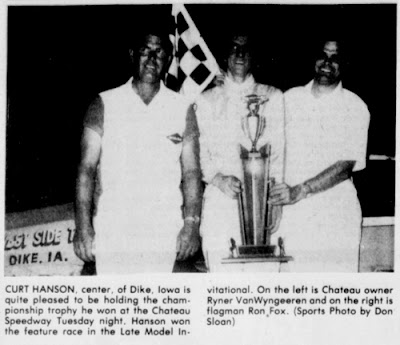 Lansing, Minn. (June 22, 1976) - Curt Hansen of Dike, Iowa, hasn’t done a whole lot of racing at the Chateau Speedway in Lansing, but it's going to be awhile before his name fades out of the picture.

Hansen brought his 1975 Camaro to the Chateau Tuesday and when the Late Model Invitational action was over, there was quite a crowd around Hansen and his car.

In the feature, Hansen started in the fourth row on the outside.

On the second lap of the finale, a spectacular five-car pileup sent favored Leon Plank of Eau Claire, Wis., Dave Noble from Blooming Prairie, Ed Sanger from Waterloo, Iowa and Darrell Zwiefel from Kasson to the pits under wrecker power.

The other car in the wreck stayed in the race. That was Hansen's. He took the front row spot in the restart and from then on it was just a matter of who would finish second, Don Hoffman of Des Moines. Iowa.

Hansen ended up with $710 in total winnings. There were 30 late model cars in the invitational from Iowa, Minnesota and Wisconsin.