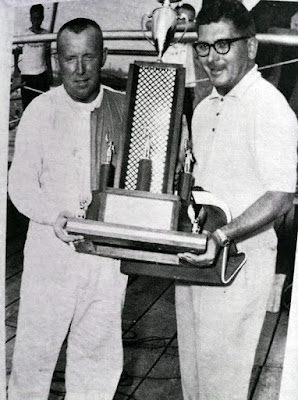 Terre Haute, Ind. (June 21, 1959) - The largest crowd ever to view car racing at the Fairgrounds, some 8,000 fans, saw chunky Don Branson win the feature race and the $1,287 that goes with it Sunday afternoon. Including his qualifying money, promoter Don Smith, reported that the 38-year-old Urbana, Ill., veteran netted somewhere in the neighborhood of $1,200 for his efforts.

Branson has always been regarded as a regular here during the sprint and midget races. However, it has been during recent years that he garnered the big money.

In the past, he would be among the top qualifiers but couldn’t snag first place. That’s all changed since Branson captured the 100-lap midget feature last October and opened he local sprint car season with a victory.

He has to be recognized as the hottest driver on the track here now.

Smith, in reviewing the race, commented, “I thought we were going to have a really big crowd. Cars were lined up for blocks and blocks. I was very pleased with the turnout.”

Branson experienced little difficulty in winning the feature after the first lap when he fought off Van Johnson.

Some 12 minutes and 47 seconds later he was nearly a quarter of a lap ahead and Van Johnson was busy with Tommy Hinnershitz from improving his third-place position.

Ed Elisian, who sporadically gave Hinnershitz a battle for third, settled for fourth.

The first three drivers – Branson, Johnson and Hinnershitz – all consummated the race in the same location they started.

Branson won the first heat with Johnson finishing some 30 yards behind in the rear.

Bobby Grim finished last in the first heat but got the pole position for the next heat and won handily. Red Amick’s car wouldn’t cooperate in the second heat and didn’t start while Jud Larson didn’t even complete one lap.

Ed Elisian turned in the niftiest show of the afternoon in the third heat. Larson and A. J. Foyt were in the front row, with Art Plas in the second row on the inside and Elisian on the outside.

The 31-year-old Elisian in his black car, which bore the #98 passed Larson, Foyt and Plas on the first three turns and commanded a redoubtable lead for the rest of the race.

Foyt and Eddie Sachs started one-two in the semi-feature and completed the 10 lapper in the same fashion.

Jud Larson, who beat most of the drivers into Terre Haute by arriving Saturday night with his Bud Sherk Offy, set a new track record for one lap but it was so on replaced by Van Johnson with his 23.70 second time.

Don Smith regretted that Johnny Thomson didn’t appear. “I don’t know what happened. We were under the impression he would come, and I’m sorry we put it in our press releases.”