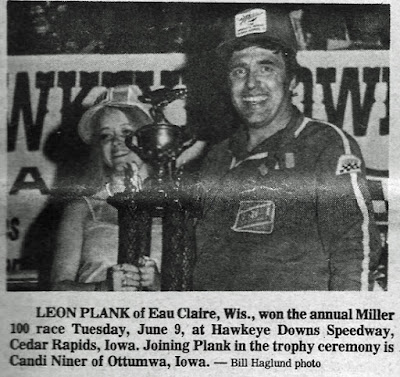 Cedar Rapids, Iowa (June 9, 1981) - Leon Plank has had nothing but bad luck at the Hawkeye Downs Speedway in the past.

Last season the Eau Claire, Wis., driver led the Yankee Dirt Classic for 99 laps, only to be outsprinted by Rodney Combs of Lost Creek, W.Va., on the final lap. And earlier this year, at the Downs' first special event, Plank crashed and was unable to finish.

But Tuesday night Plank had all the luck he needed, and a little more. He outlasted 28 drivers and nipped Viola's Ken Walton to win the ninth annual Miller 100 at Hawkeye Downs.

“I had some luck and I needed it,” said an excited Plank after receiving his trophy. “My car didn't feel good at the beginning of the race, but we made some changes that definitely helped.”

Plank, who had the fourth fastest qualifying lap with a 23.669 second clocking over the half-mile oval, took control of the 50-mile race on the 78th lap. That's when Joe Merryfield of Des Moines and Steve Kosiski of Omaha pulled off the track with car problems.

Merryfield, who had held the lead since the 28th lap, pulled off the dirt track after Kosiski was black flagged for having debris hanging from the rear of his car. After two laps had passed however, Merryfield returned to the race and ended with 94 laps, placing seventh overall.

Tom Hearst, who started in the second spot, grabbed the early lead and held on to that position until the 27th lap when his distributor broke, forcing the Wilton driver to pull out of the race.

“The car was running real good,” said Hearst, last year's Hawkeye Downs point champion. “But I started to feel the timing get worse and worse, then finally she just wheezed out.”

Only four yellow caution flags were brought on during the 100-lap benefit.

One was for Curt Hansen, the only two-time champion in Miller 100 history, when he hit the wall on the first turn of the 86th lap. His new # 9 car had to be towed off the track, but the Dike driver completed enough laps to place him eighth in the final standings.

Don Hoffman, who was the pole sitter with the fastest qualifying time of 23.233 seconds, was also involved in an accident. The Des Moines driver was caught in a pile-up on the final corner of the 17th lap and had to be towed from the track.

Pete Parker of Walcott completed 99 laps to finish third behind Walton. Mike Frieden of Cedar Rapids was fourth and Ron Schreiner of Eleva, Wis., was fifth.

In other action, Dave Birkhofer of Muscatine raced to an easy victory in the 15-lap “B” feature. Ron Jackson of Burlington followed, with Denny Miller of Cedar Rapids third.

Billy Moyer of Des Moines won the trophy dash, which involved the top eight qualifiers. Moyer, who had the third fastest clocking in the time trials, was followed by Parker and John Provenzano of Aurora, Ill.