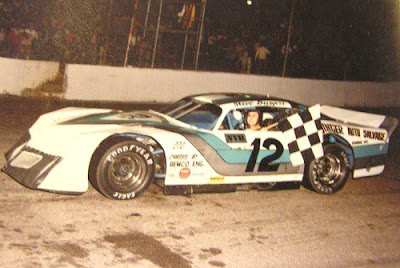 His only loss of the night was in the trophy dash, which was won by Tom Reffner off Rudolph, Wis.

In the second 55-lapper, early leader Marv Marzofka of Nekoosa, Wis., came in a close second to Burgess with Jim Sauter of Necedah, Wis., in third and Mike Miller and Tom Reffner farther back in fourth and fifth.

Marzofka jumped to a half-lap lead by the mid-point of the second feature, but a blown engine on lap 35 erased Marzofka’s comfortable margin, and two laps later, Burgess had the top spot for good.

Burgess takes possession of the Lyle Nabbefeldt Memorial traveling trophy for on year before returning to Dells Motor Speedway in 1983 to be contested again. Nabbfeldt, a veteran driver from Wisconsin Rapids, lost his life at the speedway in a racing accident in 1973.

The traveling trophies were the idea of the Nabbefeldt’s children. Mike Miller, the defending champion, relinquished the trophy at this year’s event.