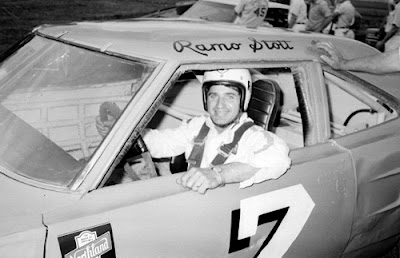 Eldon, Iowa (June 24, 1972) - Ramo Stott has class and displayed his wares in taking feature honors at Eldon Raceway on Saturday. It was the ninth win in 14 outings for the Keokuk gent.

“There was a fine field of cars here tonight and I didn’t breathe easy until it was over,” stated Stott. “This is getting to be one of the best tracks around and everyone was really running.”

Bill Zwanziger of Waterloo didn’t set precedent as he missed in his attempt to win his fourth straight feature.

“Zwanziger beat me out at Cedar Rapids Friday and he can really move,” added the nationally-known driver.

The night had to rate as the best in every sense in this season and likely for the two-year span. Twenty-five late models and 11 sportsman cars made a big night for the 2,500-plus crowd. Next week’s purse has been upped $200 in the feature making a total purse of $2,700.

Stott started in 10th position and maneuvered his way through the tight field. Steve Fraise of Keokuk leaped from his burning auto on the fifth lap. Mike Niffenegger of Kalona took the early lead but lost it on a spin out following a tangle which resulted in a verbal confrontation with Pokey West of West Chester afterwards.

Stott passed Bill McDonough of Cedar Rapids and Niffenegger on the 14th time around and Niffenegger spun on lap 15. The next time around Ron Perdock of Washington got a bumper car ride and was smashed several times in a spin. Junior Reese of Belknap dealt the crushing blow after several others were caught up in the tangle.

With five laps to go, the field was cut in half from the starting 16. Bill Newman of Burlington and Mike Derr of Keokuk got to needling each other toward the finish to add more anxious moments.

John Babb of Ottumwa took the early lead in the first heat but wound up third behind Niffenegger and Stott after getting hung up in a turn.

Zwanziger won the second heat and kept Gordy Blankenship off his tail for second. Blankenship drove all night from Eldon to race USAC in Terre Haute, Ind., on Sunday.

Fraise led all the way the third heat and West nosed out Bob McCall of Ottumwa for second under the checkers.

Niffenegger won the Australian Pursuit taking out McDonough and Fraise while Zwanziger was second eliminating West. Derr won the 10-lap consolation ahead of fender-bending foe Newman.

Dick Lewis of Ottumwa kept Dick Jones of Eldon off his tail and cruised to the sportsman main. Lewis qualified by winning his heat easily holding off Jones again. Ernie Weeks of Eldon won the other heat.