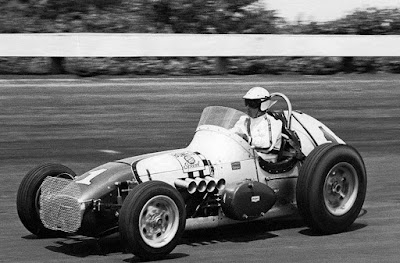 “Lady Luck”, who rides along with all winners of auto races, apparently didn’t have as much to do with Sunday’s race as it first appeared.

According to the scorers and the public address announcer, Jim Hurtubise was in the lead from the 33rd lap to the 94th, when his engine conked out and he was forced out of the race.

Foyt, “Who was running in second” at this point, took the lead and won the race six miles later, and fans were talking about how “Lady Luck” was working overtime on Foyt’s behalf.

When the race was over, Foyt and his pit crew argued with officials and scorers that Foyt did not take the lead on lap 94 but had been leading ever since lap 44.

Foyt said that on the 44th lap Jim Hurtubise took a spin into a ditch and he passed him. Hurtubise readily admitted this after the race. It only took him 10 or 15 seconds to get back into the race but by this time, Foyt was way ahead.

However, Foyt’s scorer missed scoring him for the lap. After Foyt’s complaint, a recheck of the records showed that he was right. Either way, Foyt won, but he didn’t want to be tagged the “Lady Luck” driver.

An announcement was made over the public address system about the mistake, but by this time most of the fans had already left.

On the opening lap, Hurtubise took the lead away from Keller and held the lead for 21 miles. Then Keller took command until the 33rd lap. At this point, Hurtubise moved back in front and stayed there until he took a spin into that ditch on the 44th lap.

“I was working easy,” Foyt said later. “I did have some rear transmission trouble and couldn’t use my brakes, but you don’t use them on this track anyway.”

He admitted having one close call on the 96th lap when he bounced over a bump in “Puke Hollow" (first turn) and thought he might go through the fence. But he straightened out and breezed to victory.