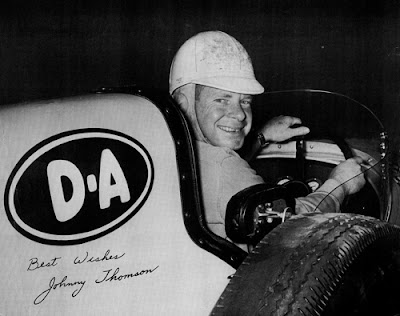 Langhorne, Penn. (June 2, 1957) One hundred miles in less than one hour was witnessed by 25,000 auto racing fans at Langhorne Speedway yesterday.

Johnny Thomson, of nearby Boyertown, Penn., established a new world and American record for the century distance, when he covered 100 laps at the Lower Bucks County oval in 59 minutes, 53.74 seconds.

Thomson won the pole position with the fastest qualifying time of 33.33 seconds, or 107.946 miles per hour.

Thomson, driving the D.A. Lubricant Special, Indianapolis type sprint car, owned by Racing Associates, held the lead from the start until the 61st lap when he made a surprise pit stop.

Thomson had better than a lap lead when he went into the pit for a tire change and fuel. The pit crew got him back on the course in 44 seconds, but Bob Veith, Orlando, Calif., and Eddie Sachs, Allentown, Penn., had moved into the first two positions.

It only took seven laps (68) for Thomson to regain his lead. He then roared to victory, the first man to drive 100 miles in less than an hour.

Joltin’ Jud Larson, of Kansas City, Mo., who had moved up from 10th to third place, hit the outside rail on the fourth turn of the 85th mile and did an end-over-end flip. The race was slowed down, under the caution flag, for a few seconds to permit an ambulance to cross the track.

Larson was taken to Lower Bucks County Hospital where doctors reported he had suffered a broken right arm. He was detained at the hospital for further x-rays today.

Sachs, piloting the Schmidt Special, was the only other driver to complete the 100 laps. He finished 31 seconds behind the winner.

A brisk wind and the threat of an imminent shower, caused the starter to display the red flag, stopping the race, immediately after Thomson crossed the finish line. Sachs, in his last lap, got credit for the full 100.

Jimmy Bryan, of Phoenix. Ariz., the early favorite for the 100-mile classic, was on hand for the race but without a mount. Bryan finished third at Indianapolis on Memorial Day. He announced to the crowd that because his chief mechanic was ill, his dirt track car was not prepared for the race.

Bryan also announced that Pat O’Conner because when mechanics broke down his engine after the 500-mile race, they discovered a cracked crank case. There wasn’t enough time between last Thursday and yesterday to get a new one installed.

Bryan said he was very disappointed he didn’t get the chance to try for his third 100-mile championship at Langhorne. He made the trip from Indianapolis to Langhorne, hoping to get a job driving another racer. All assignments were already booked.

Thomson lapped his first car on the sixth lap and lapped the entire field on the 41st.