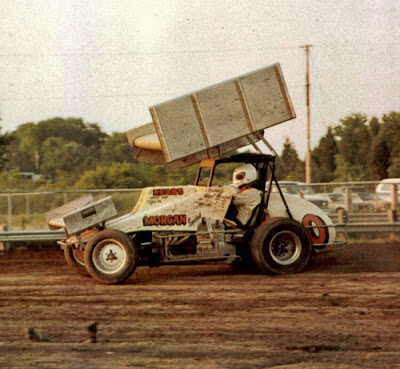 Wilmot, Wis. (June 25, 1983) – Rick Ferkel, Tiffin, Ohio, brought the Morgan sprinter to the first of a three-race series of the J&L Gas – Wilmott Winged Open on Saturday night and although he was only 21st fastest of the 41 qualifiers, he improved quickly, winning his 10-lap heat race, the 25-lap B-main and the top prize of $2,000 after winning the 50-lap A-main.

Dick Colburn started the race off by leading the first three laps before his engine lost power. This allowed Craig Hemmen to take over followed by Ferkel, Jim Moulis and Bill Kojis.

Ferkel was the 13th starter in the 20-car field but found that number not to be unlucky as he took the lead from Hemmen on lap 13. Bob Robel, who started alongside Ferkel in the 14th position, was not as quick to get up front but once he made his move, he was able to overhaul the runner-up spot from Hemmen just before Craig dropped out with transmission problems. Robel collected $1,000 for hi second-place finish ahead of Rick Lemanski, Dean Shirley and Chuck Amati.

The top-three finishers on the A-main had just finished that way in the B-main with Dean Shirley being the first of the top 12 qualifiers “seeded” to the A-main to finish as high as fourth.

The C-main of 15 laps was won by Sam Spitz of Kenosha, Wis., who earned a starting spot in the B-main in which he finished seventh, good enough for a spot in the A-main, where he finished 14th.