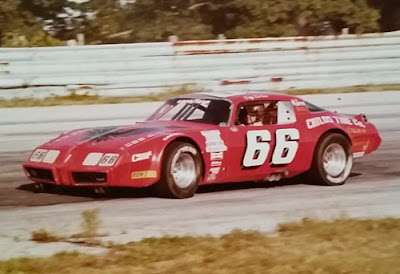 The first 75-lapper saw Bay Darnell lead the way for the first nine laps before Sal Tovella made a bid for the top spot. As the two cars approached turn three on the 10th round, they collided and spun wildly into the infield.

Tovella slammed into the inside barrier, damaging his 1977 Volare to such an extent that he was through racing for the evening. Darnell was able to have his Camaro repaired during a subsequent pit stop and returned to finish 10th in the 20-car field.

The Darnell-Tovella mishap turned the lead over to Ryan, who remained in front until Dave Watson and Wallace passed him to claim first and second respectively, on lap 17.

Wallace, the night’s fastest qualifier, pulled ahead of Watson on laps 21, but six circuits later Watson retaliated to regain the number one spot. Wallace moved in front again on lap 40 on the half-mile oval and the duel ended moments later when a malfunctioning piston sidelined Watson after 42 laps.

Wallace’s only other serious challenge came late in the event, when Ryan began closing in on the Arnold, Mo., pilot, but Wallace was equal to the task and held on to record the victory. Ryan settled for second, ahead of Ramo Stott, Bill Venturini, Chuck Gurney and Ricci Ware Jr.

The field for the second 75-lapper was gridded according to the order of finish in the opener, putting Wallace on the pole and Ryan on the outside of row one. At the drop of the green, the two immediately pulled away from the rest of the field, with Wallace leading the initial 55 laps.

However, oil pump problems forced Wallace to the sidelines on lap 56, giving Ryan the lead he would never relinquish. Only Gurney, who placed second, was able to avoid being lapped by Ryan as the Iowa chauffeur breezed to an easy triumph. Ware came in third, Venturini fourth, Darnell fifth and Jim Cushman sixth.