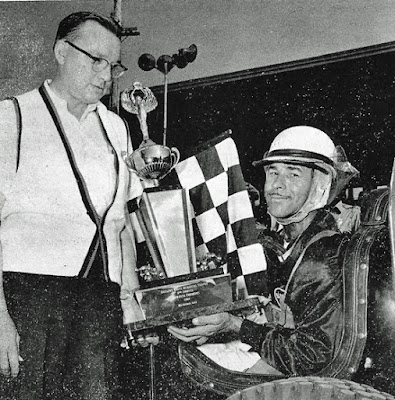 Des Moines, Iowa (June 7, 1959) – Pete Folse, the wise-cracking veteran of the dirt tracks, had room to spare in winning the 25-mile Gaylord White Memorial feature of the fifth annual Hawkeye Futurity auto race before 10,000 Sunday at the Iowa State Fairgrounds.

It wasn’t until motor ills forced two previous leaders to the sidelines that the grizzled Floridian moved to the front on the 12th lap. He finished 700 yards ahead of second-place Jim Hurtubise of New Lennox, Calif.
Folse’s winning time was 23 minutes and 48.75 seconds.

There were no serious accidents despite a hard, slippery racing surface which made the going dangerous through the late laps of the race.

Third place went to Parnelli Jones, reportedly a red-hot driver from the California Racing Association, in a Chevrolet-powered outfit. Lee Drollinger of Champaign, Ill., grabbed fourth and fifth went to Harold Leep of Wichita, Kan., who nosed out Buzz Barton of Tampa, Fla.

Folse, driving thee same Offenhauser that Bobby Grim won in last year, was a bad third-place through the first five laps. Herschel Wagner of Hickman Hills, Mo., a contender who won the pole position with a qualifying time of 25.01 seconds led the field at that stage.

Then Arnold Knepper of Belleville, Ill., caught Wagner on a turn going into the 6th lap and kept the lead on until the 9th when a valve trouble put him out of the race.

Wagner regained the lead but only briefly. On lap 12, with Folse riding his exhaust stack, Wagner experienced brake failure and was forced to quit.

Mickey McCormick of Hutchinson, Kan., challenged Folse for the next few laps but dropped out with a broken piston on lap 16.

Jones took up the next pursuit and lasted until lap 38. The Californian almost spun on a high turn, slowed to avoid it and was passed by Hurtubise, who had moved up from ninth position.

At that stage, seven of the original 20 starters were in the pits and no one was in contention.

Hurtubise wheeled off the best 5-mile qualifying heat mark with a time of 4 minutes and 18.77 seconds, only two seconds from matching a 1936 mark set here by the late Gus Schrader, the Cedar Rapids race pioneer.