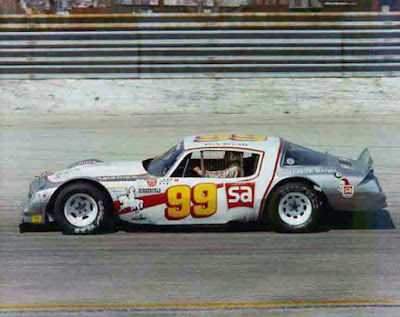 Dick Trickle
(Keith Vercauteren Collection)
by Lee Ackerman
Omaha, Neb. - “The White Knight” Dick Trickle of Wisconsin Rapids, Wis., will go down in auto racing history as perhaps the greatest short track driver of all time.
It is believed Trickle scored over 1,200 wins in his illustrious career and if you wonder how a driver can have that many wins just go back to August of 1979 and the third annual ARTGO Racing Summer Nationals where in less than 24 hours Trickle posted five feature wins against some tough competition.

It started out on a Saturday night at the Dells Motor Speedway in Wisconsin Dells, Wis., and it started with Trickle losing the only thing he lost within those 24 hours when Mark Martin of Batesville, Ark., outqualified Trickle, posting a new track record of 13.927 seconds. Trickle was right behind in second with a lap of 14.020.

Then in the first 75-lap feature Trickle wrestled the lead away from Bob Senneker of Dorr, Mich., on lap 44 and stayed out front to take his first win of the Summer Nationals. Senneker finished second, John Ziegler finished third, Tom Reffner of Rudolph, Wis., was fourth and Randy Sweet of Kalamazoo, Mich., rounded out the top five.

On Sunday afternoon it was off to the Capital Super Speedway in Oregon, Wis., where Trickle started the day off with a new track record in qualifying of 18.376 seconds.

When the green flag dropped on the first of three 50-lap events it was Randy Sweet putting his Camaro out front and trying to open a healthy lead, but the pack stuck with him. By lap 20, Trickle who started in the fifth row was up to third and by lap 26 was by Sweet for the lead and then went non-stop with no cautions waving for his first win of the day.

Then it was time for the second 50-lap feature, and it was Larry Detjens taking the lead as the green dropped. Detjens stayed out front until lap 16 when two-time Summer Nationals champions Joe Shear put Dave Evans Camaro on the point. Shear’s lead lasted until lap 32 when the White Knight roared to the front and stayed out front to take Starter Bill Oronley’s checkered flag and post his second feature win of the day.

A 20-lap semi was then run with John Speer of Janesville, Wis., taking the win over Bob Jusola and Leonard Reimer.

Finally, it was time for the third and last 50-lap feature event. When the green fell on the 21-car starting field it was Dave Watson taking the point from his outside front row starting position. By lap 20, guess who, Dick Trickle was on Watson’s rear bumper and on lap 27 the White Knight went to the front and held on for his fifth feature win in 24 hours.

The two shows drew nearly 80 different late model drivers with the 60-car field at the Dells Motor Speedway an all time ARTGO Racing record. The amazing part of this story is the number of quality drivers that were in the field. Many drivers went on to compete in NASCAR and if a list of the greatest paved short track drivers were compiled, many on that list were in attendance at these two great short track events.
The White Knight is gone as are other great drivers from these two events but their accomplishments on the short tracks of America leave us with many great memories and a wealth of racing history.