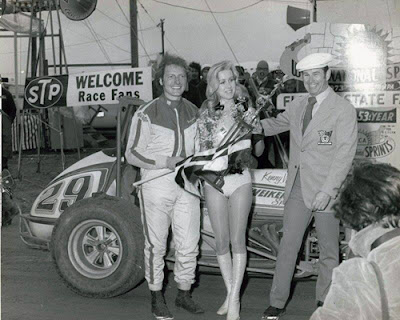 Tampa, Fla. (February 10, 1973) – Kenny Weld of York, Penn., played the starring role in the second program of the IMCA Winternationals Sprint series at the Florida State Fair on Wednesday evening, along with the first snow flurries in the Tampa in 18 years.

The severe cold cut the crowd to an estimated 5,206 fans as Kenny, the third of the Weld brothers, won the heat, STP trophy dash and 30-lap feature driving the Weikert Livestock Special.

Jan Opperman, who turned the same trick on opening night, flipped during the feature and damaged the front end of his Bogar Chevy. Minute later, Tom Nordstrom flipped his sprinter in the same spot and was momentarily stunned. Neither driver was injured.

Finishing second to Weld was Bobbie Adamson of Coraopolis, Penn., and third was Earl Wagner of Pleasantville, Iowa.

Opperman flipped as he and Thad Dosher were battling for second place in the feature. Opperman found himself caught between Dosher and the wall and his car nosed up the wall taking out about 20 feet of protection rustic fencing atop the concrete wall. It did a half roll and landed upside down.

By the fifth lap, Weld was well in front, but he was forced to surrender the ground gained, first when Chuck Amati spun, and then Dick Sutcliffe did a waltz. But only once was Weld seriously challenged when Adamson tried to squeeze by on the inside.