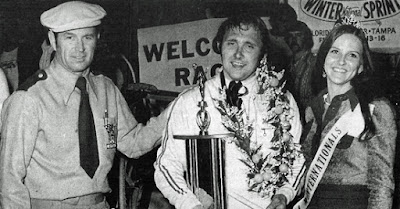 Kramer Williamson accepts his trophy from IMCA's Woody Brinkman as Ms. Winternationals joins in the celebration.

Those 5,125 sitting in the Florida State Fair grandstand know now. He is the man who led from start to finish in the 30-lap feature of the IMCA Winternationals Sprints series program on Wednesday. He also the man who won the first heat but then his name was not so noticeable.

Williamson, who hail from Mechanicsburg, Penn., explained his anonymity.

This is his first year to race at the Florida State Fair and Winternationals Sprint Series. This was also the first time in International Motor Contest Association competition.

He had not been doing anything in earlier races of the series because he and his mechanic had not figured out the right combination.

“For a while there I thought we would never get in the ballpark,” Williamson said, after a kissing session with race queen Wanda Vetzel, the flash from the cameras in victory lane and the backslapping of congratulations.

But he and mechanic Joe Hamilton kept working and he survived a wreck the wreck strewn 30 laps and a late challenge by Duane “Pancho” Carter to win “his biggest race ever”.

“Pancho? Yeh I knew he was coming,” Williamson answered. “Then, I just started going faster.”

Carter once got his front wheels even with the leader but on the next lap his radiator hose blew, and he exited the track in a cloud of steam.

That allowed Jan Opperman, the Beaver Crossing, Neb., driver who had been dominating the Winternationals to date with three feature wins, to roll across the finish line in second behind Williamson. He was followed by Larry Kirkpatrick of Wood River, Ill.

That was the story of the race but not of the day.

The surprise of the day was the amazing performance of Ray Lee Goodwin in time trials. The Kansas City veteran wiped out the one-lap record of Bobby Grim that had stood since 1955. Grim’s time for a lap was 24.82 seconds, set in the days when the powerful Offenhauser were the winning cars and the knobby tires gave the Offy’s a great bite on dirt.

Goodwin’s time was 24.639 seconds around the half-mile dirt oval. He made it clear that his car was perfectly balanced and with a drive that was perfection.

There was a rash of spin and wrecks. The worst, one of three flips during time trials and warmups, was by Robert Smith of Gibsonton, Fla., who did a series of end-over-end flips coming out of the second turn. Fortunately, he was unhurt and returned as a spectator.