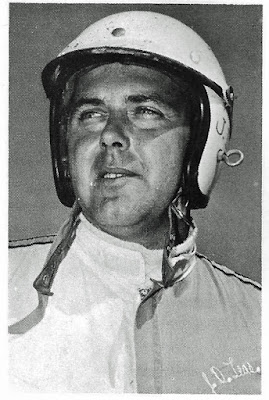 Tampa, Fla. (February 7, 1971) – J.D. Leas might have been halfway home to Winterville, Penn., Sunday afternoon instead of taking the checkered flag in the feature in the third of the series as the IMCA Winternationals Sprints won its race against the weather.

Leas crashed his car at the Florida State Fair half-mile track on Saturday and the car’s owner, W.J. Watson, wanted to pack up and go home.

But the crew pitched in, straightened things out and gave Leas the opportunity to finish in front of Jerry Blundy, Galesburg, Ill., and Jay Woodside, Kansas City, in that order.

“You should have seen that thing last night,” Leas said, pointing to his steaming machine after crawling out and receiving his victory kiss from speed queen Barbara Clack. “It was a mess.”

“I got that wall over there,” pointing to the north end of the track. “shortened the car about three inches. The owner took a look at it and said, ‘Let’s go home’”

“But everyone got busy, worked through Saturday night and all Sunday morning and put the pieces back together. They worked so late in the morning they were almost shutout at the gate.”

Everything was just not right because Leas hit the wall again during the second lap of his time trial and was forced to take the first lap time, which, incidentally, was the eighth fastest of the day. Chuck Amati of Greenfield, Tenn., the sensation of the race meet, had the fastest lap, with a time of 26.504 seconds. Unfortunately, Amati would miss the feature with a broken rear end.

Leas was challenged repeatedly by Blundy in the late rounds of the 30-lap main event, but the latter couldn’t get the momentum for a pass.

It was a completely different track than what drivers enjoyed during the first two meets. The surface was packed and the turns slick, with the groove down on the inside. The loose stuff at the top of the track was too dry and light to give the rim riders any a cushion to push their right rear wheel.

Leas led from lap 3 when the two front cars, Cliff Cockrum, Mitchell, Ind., and Rich Schmelyum, Westminster, Md., tangled in the north turn. Cockrum ran his car right over the tail of Schmelyum while attempting to make a pass.