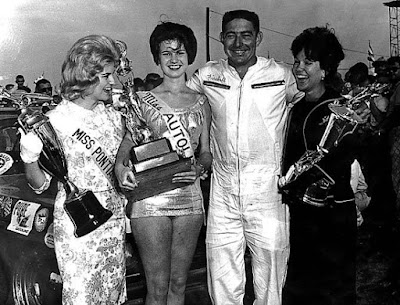 Officials of NASCAR will review a protest field by runner-up Richard Petty of Randleman, N.C., who finished more than a half lap behind Roberts and his record-shattering 1962 Pontiac.

Petty charged that Roberts had more than the permitted six crew members over the wall on his last pit stop.

NASCAR officials pointed out that the rules call for such protests to be immediately, and if upheld. Robert would have been flagged from the race. Roberts made his final pit stop with 50 miles remaining and the protest was not lodged until an hour after it was over.

Roberts shrugged off the protest of his victory in the fastest 500-mile automobile race ever run.

The Daytona Beach native, driving the familiar #22 black and gold Pontiac, covered the distance in 3 hours, 10 minutes and 41 seconds to take down thee top purse of over $21,000.

There were only 21 of 48 starters running at the finish.

Petty, the only other driver to complete the 200 laps on the 2.5-mile high-banked Daytona International Speedway, piloted a 1962 Plymouth and Joe Weatherly of Norfolk, Va., was third in another 1962 Pontiac.

The only serious accident on the warm day was when veteran Buck Baker of Charlotte skidded into the retaining wall at the top of the sharply banked west turn. Baker, whose 1962 Chrysler tore down 50 feet of fence, suffered broken ribs and spinal injuries.

Roberts led for 144 laps or 350 miles during the afternoon. He took the lead on the second lap in a bid to capture the “One race I’ve always wanted to win”.

Roberts was pressed by Junior Johnson until the Tar Heel native was sidelined at the 180-mile mark with a blown engine. Cotton Owens of Spartanburg, S.C., was running strong when he left after 195 miles with a blown clutch. Defending champion Marvin Panch, driving a Dodge, was another who left early with mechanical issues.

Petty, who qualified his Plymouth a little over 150 miles per hour, “drafted” Roberts for 200 miles of the chase and was hitting speeds of 158 miles per hour during the course. Roberts said Petty’s drafting was one of the finest pieces of driving he had ever seen but added it didn’t bother him.

The disputed pit stop came with 50 miles to go and Roberts with a slight lead over Petty. He raced into the pit for gas and was back out in 20 seconds. Petty had already made his final pit stop but could not catch the speeding Roberts in the final 20 laps around the track.

Ralph Earnhardt of Kannapolis, N.C. went out early in the race with mechanical difficulty after working his way from 21st starting position to the 14th spot.

Pontiacs grabbed six of the top-10 places in the race. Besides Roberts and Weatherly in Pontiacs, Jack Smith was fourth, David Pearson sixth, Banjo Matthews eighth, and Bob Welborn in 10th.