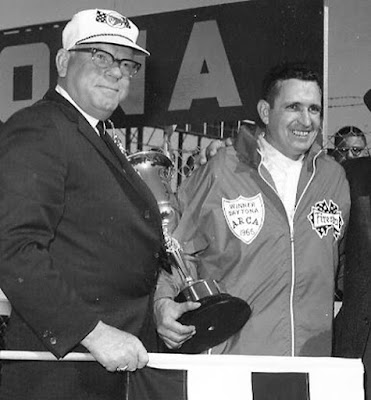 Daytona Beach, Fla. (February 20, 1966) - Talk about Inflation - Ramo Stott stopped off to get a couple of gallons of gas at Daytona’s International Speedway on Sunday, and it cost him $2,100.

Stott, from Keokuk, Iowa, had to settle for second place and $3,350 in the Automobile Racing Club of America 250-mile championship when his pit crew sent him onto the track with less than a full lank of gas in his 1965 Plymouth after his second pit stop.

He had to make a third stop and Jack Bowsher, Springfield, Ohio - who made only two pit stops - drove his 1966 Ford to the championship and a prize of $5,450.

Bowsher beat Stott across the finish line by only 100 feet, and it was that third pit stop that made the difference. The stop lasted only five seconds - just enough to splash a couple of gallons in the tank, but the slowing down time let Bowsher get that 100-foot margin.

Two minor problems cost Bowsher a little extra pit time - an adjustment to his wedge, engine, and transmission trouble, He spent a total of 65 seconds at a dead stop. Stott had no mechanical delays; stopped only 27 seconds the first time and 15 seconds the second.

But with eight laps to go and leading about 25 seconds, he saw the fuel pressure bubbling. “When that bubbles, you know you don’t have enough gas to go more than two laps,” Stott said. “There was nothing to do but alert the pit crew the first time past and come in the next time.”

Bowsher said he could not go at top speed because of his bad transmission but he coaxed 168 miles an hour out of his car or, each of the last six laps and kept Stott from catching him.

There was not as much as a brush of fenders by the 33 contenders. The yellow caution flag was out for two laps when Phil Cronin of Houston, Tex., blew an engine, but it barely slowed the leaders as Cronin coasted into the pit.