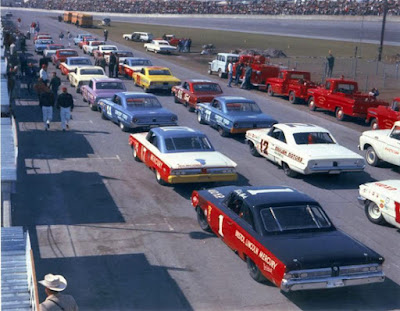 Daytona, Fla. (February 23, 1964) - From a competitive standpoint, the 1964 Daytona 500 was nothing special. Richard Petty dominated the race, leading 184 laps, including the final 148 as the new Plymouths were head and shoulders above the rest of the competition.

However, a glance through the finishing order reveals a veritable Who’s Who of American auto racing. With no fewer than six current or future Cup champions, nine Daytona 500 winners, three Indianapolis 500 winners and two drivers with Formula One experience -- not to mention the patriarch of the Earnhardt racing clan and the only black driver to win a Cup race -- the 1964 Daytona 500 could be considered the greatest field in NASCAR history.

And sadly, five drivers who competed in that race would lose their lives in racing accidents before the racing world assembled at Daytona again the following winter.

Petty's success in both NASCAR and the Daytona 500 has been well-documented. He would go on to win the 500 six more times in the next 15 seasons and finish with 200 career victories and seven championships. Petty started the ‘64 race alongside pole-sitter Paul Goldsmith as Chrysler products -- featuring the new 426 cubic-inch Hemi engine -- captured eight of the top 10 starting positions.

And it didn't take long for Petty to show his superiority. He took the lead from Goldsmith on the second lap, and after Bobby Isaac led for three circuits, only gave up the lead as a result of an early round of green-flag pit stops. From that point on, Petty was unstoppable. He lapped the entire field, beating runner-up Jimmy Pardue to the checkered flag by one lap and 9 seconds.

Driving as a teammate to Petty, two-time Cup champion Buck Baker finished 12th, six laps behind. Ned Jarrett, the 1961 champ -- who would win a second title the following season -- was involved in a mid-race crash and wound up 27th.

Future three-time champion David Pearson, whose name would be forever linked with Petty’s after the finish in the 1976 Daytona 500, also crashed out of the ‘64 race, finishing 30th. Isaac, who would wear the 1970 Cup crown, ran out of fuel late in the going and was credited with 15th place. And a young Cale Yarborough -- who wouldn't score his first Cup victory until the following season -- was one of only 20 of the 46-car field still running at the finish, as he wound up 17th.

In addition to Petty, Pearson and Yarborough, each winner of the previous four Daytona 500s took part in the '64 race. Starting third, 1960 winner Junior Johnson drove a steady race to finish ninth. Driving the Wood Brothers’ No. 21 Ford, 1961 winner Marvin Panch wound up fourth. Daytona native Fireball Roberts, the 1962 winner, went out early with transmission troubles and was credited with 37th place. And Tiny Lund, who had pulled off a surprising upset in the 1963 race, was five laps down at the finish in 11th.

Two other drivers in the field would visit Daytona’s victory lane in future 500s. A.J. Foyt, better known for his four Indianapolis 500 victories, would win the Daytona 500 in 1972. And Buddy Baker, who always seemed to be the bridesmaid at Daytona, finally captured NASCAR’s crown jewel in 1980.

In addition to stock car’s finest, many of open-wheel’s top stars were also in attendance that day. Future three-time Indy 500 winner Johnny Rutherford finished 26th in Bud Moore's Mercury, while 1963 Indy 500 winner Parnelli Jones wound up 28th after the engine let go in his Mercury after 77 laps.

And making his third and final Daytona 500 appearance, sports-car legend Dan Gurney finished 14th in one of the Wood Brothers team cars.

Also worthy of mention: Ralph Earnhardt wound up 19th in his final Daytona 500 start, and Wendell Scott -- coming off a victory at Jacksonville two months earlier -- was credited with a 38th-place finish after his Chevy overheated just seven laps into the event. Frenchman Jo Schlesser drove Bondy Long's Ford to a 13th-place finish in what would be his only Daytona 500 appearance.

The 1964 Daytona 500 was also a prelude to what was a tragic season for racing in general.

In May, Roberts would be involved in a fiery accident during Charlotte's World 600 and die of his injuries one month later. One week later, sports-car ace Dave MacDonald -- who scored a top-10 finish at Daytona -- would crash on the first lap of the Indianapolis 500 in a horrific accident that claimed his life and that of Eddie Sachs.

Those two accidents would lead to major safety improvements in both NASCAR and USAC, including the eventual implementation of fuel cells and more fire-retardant driving suits and helmets.

Three other drivers would be killed in the next 12 months in tire-testing accidents. Pardue lost his life while doing tire testing for Goodyear at Charlotte in September when a tire blew and he lost control, crashing through the guardrail. Billy Wade, who finished sixth in the ’64 race, was killed in a crash at Daytona the following January during tire testing. And rising open-wheel star Bobby Marshman died of injuries sustained in a tire-testing accident at Phoenix in December.