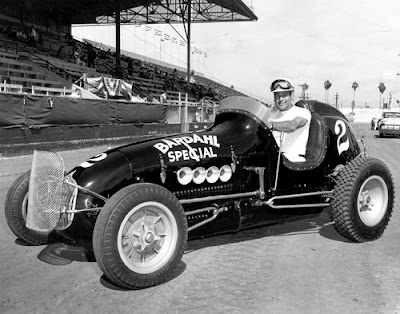 Tampa, Fla. (February 4, 1959) – Eddie Loetscher of St. Louis was critically injured in a rolling crash during the first heat of the Florida State Fair auto races on Wednesday. Another driver was also hurt when he slid into Loetscher’s hurdling car.
Loetscher’s Offenhauser skidded into the wall and turned over three times. The other car was driven by Mickey McCormick of Hutchinson, Kan., who suffered a broke nose and abrasions in the accident.

Loetscher underwent an operation for a spleen injury and was placed on the critical list. He also suffered a broken arm and fractured ribs.

Riding smoothly in spite of the hole-filled and slippery track, Folse drew the plaudits of the 4,200 in attendance by coming from last to first in his 7-lap heat race.

Winners of the other two heats were Buzz Barton of Tampa and Bob Tattersall of Streator, Ill. Barton also won the 5-lap match race while Johnny Roberts of Wheeler, Mich., won the 8-lap consolation.

Folse moved into the pole position for the main event when McCormick, the fastest in qualifying with a time of 25.25 seconds, was injured in the first heat melee.

Folse led the pack through the first turn and came out with the lead, with Barton trialing, driving in the whipped dirt. The lead duo rode close for the first five circuits, but Folse soon found the best combination between the groove and the holes and pulled away to a comfortable lead. He was a full straightaway in front when he caught the checkered flag.

Barton and Don Carr of St. Petersburg staged a battle in the final five laps and Carr passed Barton as they went into a thick traffic of cars being lapped. Barton settled for third while Red Amick of Muncie, Ind., was fourth and Leon Hubble of Indianapolis was fifth.