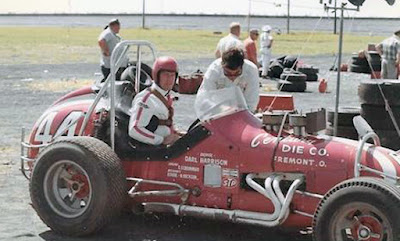 Tampa, Fla. (February 9, 1969) – Driving a buckling, rocketing sprinter #44, Darl Harrison of Tiffin, Ohio, won one of the more closely fought races at the Florida State Fair in many years before 7,590 fans.

It was the third race of the IMCA Winter Sprint Series and apparently Harrison had learned enough about the narrow half-mile of dirt to outfox the fox himself, four-time IMCA champion Jerry Richert.

At the finish, Richert was in third-place after being passed by a hard-charging Don Mack four laps before the end of the 30-lap main event.

A battle developed between leader Richert and Harrison about midway through the feature and the pair traded the lead back and forth, lap after lap, with Harrison going to the front down the backstretch and Richert takin it back as they swung out of turn four.

On the 24th lap, Harrison slipped under Richert on the inside on the south turn and came out of the second turn too far ahead of Richert. From that point on, Harrison pulled away, leaving the battle to Richert and the oncoming Mack.

Mack got by Richert on lap 26 to take second. It was a magnificent run by the hard-luck driver, who had blown two engines since leaving North Dakota. He moved from his 13th starting position for an impressive second-place finish. Saturday he had went from 12th to second before blowing his engine.

The race was run in 15 minutes and 42.61 seconds, slowed by two caution flags brought out by harmlessly spinning cars.

Harrison found the track exactly to his liking, damp, loose, and with a good cushion of clay at the rim.

“It looked best up there,” he said of his rim ride during his chase of Richert. “I worried about the car holding together. The turns were dug out pretty good.”