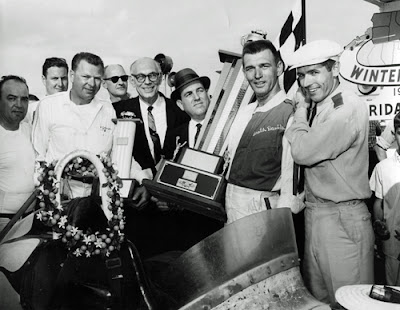 Jerry "Scratch" Daniels accepts his trophy after winning the 30-lap feature at the Winternationals.

Tampa, Fla. (February 15, 1967) – Jerry Daniels of St. Paul, Minn., rode the tight turns of a narrow groove to win the 30-lap feature of the third of a series of Winternationals Sprints at the Florida State Fair on Wednesday afternoon, after earning the pole position with the fastest qualifying lap.

Daniels also won the consolation, which was his entry as a qualifying race into the feature.

Starting on the inside of the front row, Daniels jumped into the lead at the start of the race and was never in serious trouble to the finish. Only a mental lapse could have beaten him on the one-groove track.

Jerry Richert of Forest Lake, Minn., the defending IMCA national champion, won the first heat but dropped out early in the feature. Gordon Woolley, the one-time national champ from Waco, Tex., won the second heat and Don Hewitt of Troy, Ohio, was victorious in the third heat.

Tom Bigelow of Whitewater, Wis., proved to be the fastest in the 5-lap match race.

There was a lot of jockeying going on during the time trials. Some of the drivers were passing up their second of their two timed laps to get a crack at the track later in the day when they hoped it would get faster from a coating of rubber.

However, Daniels was one of the first out and he had a much faster time trial than anyone with a time of 26.03 seconds around the Plant Field half-mile.