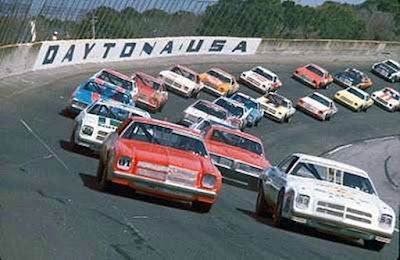 Iowan's Ramo Stott (right) and Terry Ryan (left) lead the field to the start of the 1976 Daytona 500.
Daytona Beach, Fla. (February 12, 1976) - Ramo Stott and Terry Ryan, who figured only to be cloaked in relative obscurity this week while preparing for the 18th annual Daytona 500, surprisingly have the limelight as Speed Weeks 1976 reaches its hectic climax the final four days of this week.

Stott, a Keokuk, Iowa, corn and bean farmer, and Ryan, a truck driver from nearby Davenport, each led a field of 34 cars to the start of twin 125-mile qualifying races today and will pace $1.4 million worth of high-speed machinery to the start of Sunday's $350,000 race.

“I’ve probably had more publicity out of this than anything else that's ever happened to me," said Stott, who won the United States Auto Club stock car championship last year. "The newspapers have really played it up here and my wife Judy, who keeps a scrap book of my career, is running all around the place buying up papers for the press clippings.”

While much of Stott's racing has been on short tracks in the Midwest, he has an impressive history of finishes in major NASCAR Grand National races, including having never finished out of the top 10 in any year he has competed in the Daytona 500.

Stott, a two-time Automobile Racing Club of America titlist who has been racing at Daytona since 1963, found himself the pole winner at 183.456 miles per hour after the three faster qualifiers - A.J. Foyt, Darrell Waltrip and Dave Marcis - last Sunday had their times disallowed for using “nonapproved” equipment.

Having nothing to gain by additional practice, Stott considered parking his car until race time, but his car owner Norris Reed wanted more testing.

“In practice Wednesday, we got up to 186 m.p.h. before discovering that we had a fender rubbing against a tire,” Stott explained. “We’re glad we found that out in practice. It could have meant a blown tire in the race.”

“I don't think I’m better than anyone here, but I’ve got thousands of miles on this track and I think I have as good a chance to win as anyone,” said Stott, who added he feels relaxed and confident.

Ryan, in his first NASCAR Grand National race, has more homework to do, Stott felt.

“The qualifying race should help,” he added.

Stott said he has spent time this week coaching Ryan in the fine art of drafting at 200 miles per hour.

More than 120,000 are expected for Sunday's annual running of the most prestigious of stock car races, which caps more than three weeks of racing worth more than $850,000.