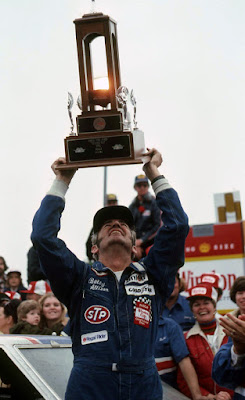 Bobby Allison celebrates winning the 1978 Daytona 500, the first of three victories in "The Great American Race."

“The sun doesn’t shine on the same dog’s fanny all the time,” the salty master mechanic from Spartanburg, S.C. said a week ago while mulling a question about a combined 118-race non-winning streak shared by him and veteran stock car driver Bobby Allison. “Me and Bobby are gonna get our turn one of these days.”

That occasion came no later than Sunday for new “Bud and Bobby Show.” The two basked their backsides considerably, like a couple of puppies out in the sun, by winning the sport’s biggest race, a Daytona 500 that was as bizarre as any in the event’s 20-year history.

Among the day’s developments –

· Three of stock car racing’s biggest stars – Richard Petty, David Pearson and Darrell Waltrip – all went out in a wild tangle while running away from the rest of the field.

· A.J. Foyt, the only man to win the Indianapolis 500 four times, took a scary, flipping ride down the front stretch and was hospitalized overnight for observation.

· Buddy Baker, who came within a few miles winning here so frequently, saw victory hopes dashed again when his Oldsmobile engine expired just five laps from the finish after he had led more laps – 75 – than any other competitor.

When Baker’s car blew, it meant Allison was home free to put Moore’s Thunderbird in victory lane, the first time that model has been there on NASCAR’s Winston Cup circuit since 1959.

Defending champion Cale Yarborough, who assumed the runner-up position after Baker exited, was experiencing engine issues with his Olds 442 and couldn’t threaten.

Allison thus cruised to a 33.2-second margin over the only other driver on the same lap with him on the 200th turn of the track that was jammed with a crowd estimated to be anywhere between 120,000 to 140,000.

Benny Parson finished third in an Oldsmobile, edging a Ron Hutcherson-driven Buick by eight inches in a photo finish for that position. Dick Brooks piloted a Mercury to a fifth-place finish.

“We had our share of luck to get here today,” conceded Allison, savoring victory for the first time since winning at Darlington in 1975.