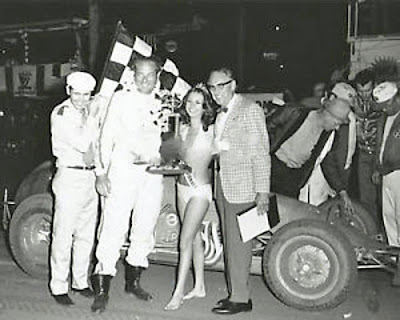 But this time, it was a tougher race for the Galesburg, Ill., veteran.

Last year he won going away, but this time he won it with his car fading away from a series of broken and falling pieces.

Blundy appeared to be in command of the race until the 22nd lap, when Chuck Amati rode up on the wall and brought out the yellow flag. Then the crowd of about 5,000 saw smoke blowing out of the cockpit of the leader’s car.

After the race, Blundy explained, “the right rear radius rod broke on the fifth lap when Ray Lee Goodwin put me into the wall. This allowed the rear end to shift and caused the universal joint to smoke.”

That wasn’t all of Blundy’s troubles. When he coasted to a stop in victory lane, the left front torsion bar arm was dangling from the Trevis-built car. But he still managed to come from his fifth-starting position, moving up steadily until he took the lead on the ninth lap when Eddie Leavitt got into the wall going into the turn.

Until his encounter with the wall, Leavitt was mowing everyone down with perfect control, moving from sixth to first on the first lap and lapping the tail end of car by the fifth circuit.

Blundy had one threat late in the race when Amati charged up through the field to challenge. But the Greenfield, Tenn., pilot lost his power steering and rode up on the wall on the north turn, bringing out another of the many yellow flags to wave that evening.

Finishing behind Blundy in the main event were Bob Kinser and Billy Cassella.

Cliff Cockrum turned in the fastest time in qualifying, with a rip around the half-mile oval in 25.38 seconds. Then, as his car was being pushed onto the track for hot laps prior to the feature, his car lost a ring and pinion gear, putting him out for the night.

The yellow flag waved in all but two of the night’s races. In one of those that went without interruption, a new track record was established.

In the second heat race, Jan Opperman spun around the half-mile dirt oval eight times in 3 minutes and 37.39 seconds, to wipe out a record set by Bruce Walkup in 1967 of 3 minutes and 38 seconds.

The races were run on a poorly lit track, a little improved over last year but still inadequately lighted.
Results –