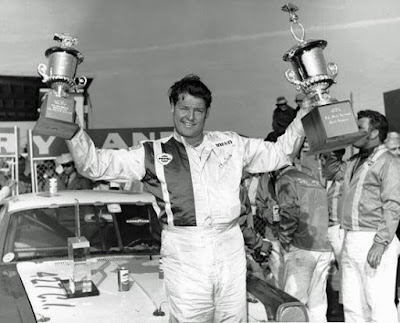 They call him “Tiny,” but DeWayne Lund stands 6-feet-4 and carries 250 pounds on that well-muscled frame of his.

It was his extra beef and courage that led to his victory in the 1963 Daytona 500 and probably saved the life of Marvin Panch.

A few days before Panch was drive the Wood Brother’s Ford in the 500-mile classic, he crashed while practicing in a sports car and it burst into flames. Lund was johnny-on-the-spot, pulling the injured Panch from the fiery inferno in one of the most heroic acts ever witnessed at Daytona.

Panch was too seriously injured to drive to Glen and Leonard Wood asked Lund if he would fill in. Lund, carless at the time, grabbed the opportunity and piloted the Ford to victory a week later.

The now 40-year-old driver from Cross, S.C., won a split-second victory over another veteran, Red Farmer of Hueytown, Ala. A crowd of 51,300 were in attendance.

Ironically, the Bondy – Long owned car is the same one that Lee Roy Yarbrough drove to victory in last year’s 300-miler. And the next day, Lee Roy won the Daytona 500.

In what was described as one of the weirdest finishes ever seen on the 2.5-mile tri-oval, Lund was comfortably out front when a caution waved with four laps to go. Pieces of tire left from another car were on the track.

For three laps, they rode under the yellow and as the field came into sight of the starter, Lund and the rest of the field got the green “go” flag, which made it a quarter-lap dash for the checkered.

“Boy!” said the breathless Lund afterwards. “That turned into a drag race at the end.”