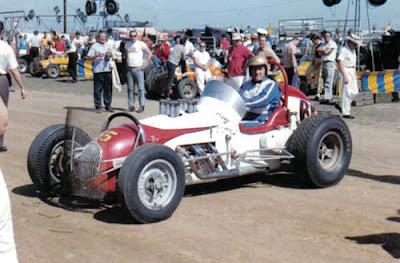 Tampa, Fla. (February 3, 1965) – More than 12,000 fans watched the second program of the week at the Florida State Fair on Saturday, and Jim McCune of Toledo, Ohio, driving the Smith Chevy, captured the action-packed 25-lap feature.

McCune, starting on the outside front row next to fast qualifier Gordon Woolley, ran second to the Waco, Tex., veteran in the opening laps, while Greg Weld was on the move from his fifth starting position.

A three-way battle soon developed as Woolley found Weld on the outside and McCune on the inside as they ran three-abreast going into the second turn. Weld, a member of the “Kansas City Mafia”, came dangerously close to the outside wall, but Woolley gave him just enough room and the 22-year-old took over the lead on the back chute.

Weld led until lap 16 when his machine, the former Chevy driven by Chuck Hulse, began to falter. It was determined later that lint in the injector nozzle caused fuel starvation.

Perhaps the best performance of the afternoon was turned in by Dave Lundy of Pittsburgh, Penn. Starting 12th, Lundy gambled on the outside of the hard, slick track and moved past car after car and finally scooted past Wooley for second spot on lap 23. Lundy also came from ninth to finish second in the consolation.

Several Indianapolis-type cars were in competition here, including Darl Harrison’s Auxter Edsel, which is the former car driven by Tory Ruttman to a fourth place finish in the 1954 Indianapolis 500.

This was a special feature victory for McCune’s car, the new Ray Smith Special. Smith, confined to a wheelchair, built the entire car himself in six months.