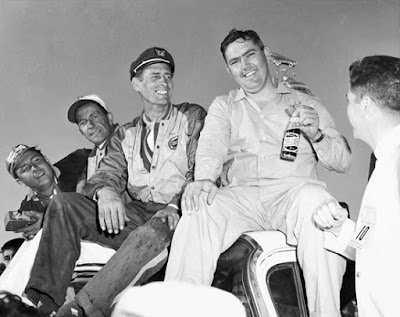 Junior Johnson basks in the moment after winning the 1960 Daytona 500.

Robert (Junior) Johnson won his title Sunday in the climactic event of a crash-punctuated weekend before 47,500 fans.

Johnson's average time for the late model stock car race was 124.740 miles per hour, compared to the 135.521 average made by Lee Petty of Randleman, N.C., in winning the 500 last year. But there were extenuating circumstances.

For 40 of the 200 laps on the 2.5-mile course, the yellow caution flag was fluttering because of mishaps, forcing the cars to a snail's pace.

Thirty-six of the 68 starting cars still were on the track as Johnson's 1959 Chevrolet got the checkered flag.

Behind Johnson and an apparent winner until the last eight laps, was Bobby Johns of Miami in a 1959 Pontiac. Johns lost his chance on the 192nd lap when he went into a spin on the backstretch.

The only accident resulting in serious injury hospitalized Tommy Herbert of Miami with a broken rib and an eye injury.