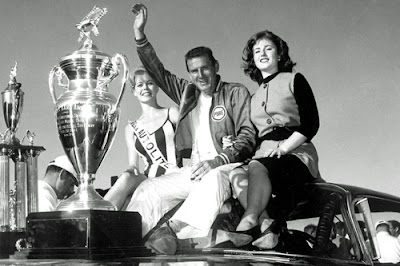 Marvin Panch waves to fans after winning the 1961 Daytona 500.

The 35-year-old Panch came on to win when Glenn “Fireball” Roberts dropped out with heartbreaking car failure after setting a pace of better than 150 m.p.h. until he was just 13 laps from the end of this grueling 200-lap grind.

A throng of some 65,000 saw Panch of Daytona Beach come in for the checkered victory flag ahead of Joe Weatherly, another Pontiac pilot from Norfolk, Va.

Paul Goldsmith of St. Clair Shores, Mich., who was third in last year's Indianapolis 500, also was third today in still another of the Pontiacs which have dominated “Speed Week” events here.

Despite the perilous speeds, the race was crash-free in refreshing comparison with Friday's two 100-milers, which were filled with numerous crashes.

Roberts was a full two and a half miles in front of the pack when he pulled into his pit, with his gold painted car smoking and the crowd groaning. A broken crankshaft was discovered, and he was pushed over to the infield.

It was a heartbreaking day also for Edwin (Banjo) Mathews of Asheville, N. C. His 1961 Ford was in second place when it was disabled in a spin off the east turn on the 183rd lap. He was the only one offering a challenge to the roaring Pontiacs.

At the same time, Darel Dieringer of Indianapolis spun out and limped in with front end smashed.

Bob “Junior” Johnson of North Wilkesboro, N. C., winner last year, was running first on the 42nd lap but was slowed by engine trouble and failed to finish.

The brutal pace started taking its toll of machines early. In the first five laps, four cars had to go into the pits for repair work. Only 30 of the 58 starters finished.

Roberts led for 12 laps, Mathews for the next three, then Nelson Stacy of Cincinnati for two in a 1961 Pontiac.

This trio continued to take turns in front until the 43rd lap when Roberts forged ahead to stay until his breakdown. At one time, at the end of the 30th lap, Roberts was driving at 152.456 miles an hour.

It was still a close battle at the 250-mile halfway mark, with Panch whittling away at Roberts’ lead until it was only seven seconds.

Then Fireball began to move out. By the 170th round, he had lapped Mathews and Panch and was two laps up on Weatherly and Goldsmith.

Some observers thought he would decide to begin coasting then. But he didn't and the demand was too much for his car.

Richard Petty of Randleman, N.C., made a surprise appearance in the race, sharing wheel time with Bob Welborn of Atlanta in a 1961 Pontiac. Petty was painfully injured Friday when his car went over the high west wall. His father, Lee, was badly hurt in another Friday race.