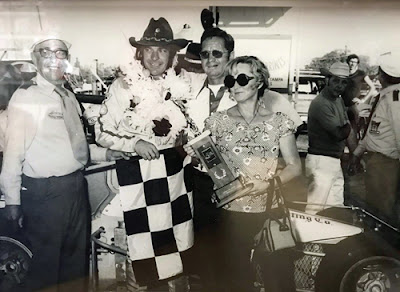 Tampa, Fla. (February 16, 1975) – The IMCA Winternationals sprint car races, otherwise known as the Jan Opperman Show, came to a close on Sunday afternoon at the Florida State Fair the way it’s been going all along – with Opperman winning.

In a race that was a near-mirror image of Saturday’s come-from-behind 50-lap feature win, Opperman fell behind early, took advantage of a race-slowing caution, puled ahead and won the 30-lap finale going away. Dick Sutcliffe, who finished in second, was a full straightaway behind Opperman when the checkers waved.

The victory was the third feature win of the meet for Opperman and it gave him the point championship with an even 800 points. Ohio’s Rick Ferkel was second in the point standings with 545 and Dick Tobias as third.

In Sunday’s feature race, pole-sitter Sutcliffe got out to an early lead and was pulling away when Ralph Parkinson Jr., lost a wheel on lap 16 and a five-car pile-up ensued.

When racing resumed, Opperman, who had been cruising in second-place, wasted little time in assuming command. He took the lead on lap 21 and roared home from there.

Opperman, the self-styled “Christian Hippie”, pointed to a mistake by Sutcliffe as the turning point in the race.

“I was beat today,” he said. “In other races, I’ve beaten myself sometimes, but not today. He (Sutcliffe) just had a faster car but he made a mistake and I was able to take advantage of it. We were coming out of the turn at the top of the stretch and he gave me some room to pull up with him.”

The points championship was up for grabs between Opperman and Ferkel entering the feature race. Ferkel had to win and hope Opperman finished sixth-place or lower but the wish never got off the ground. Ferkel dropped back early and eventually left the race on lap 19 with mechanical problems.

A crowd of 3,051 watched the closing day action which was a makeup date of a earlier rainout.