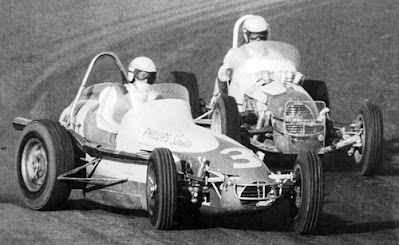 Don Branson attempts to hold off a hard-charging A.J. Foyt.

Grumpy over the way his car performed — “only hit on six cylinders in the first 50, and on seven in the second” — the Texan was happy about his $1,700 cash prize.

The chunky Texan from Houston ran second to “Grandpa” Don Branson of Champaign, Ill., in the spirited first 50, then made a runaway of the second.

Branson finished second in overall rankings. He won the first half and ran fifth in the second. Jim McElreath, Arlington, Tex., was third in overall points with fourth and second place finishes.

A sparse crowd of 6,000 saw the novel presentation, and generally liked the idea of two heats for the 100-miler because more cars ran the entire distance. But there was confusion — even among officials — about overall point standings for the two heats separated by a half-hour intermission for refueling, tire changes and tune-ups.

It was during this rest period that Foyt got an extra cylinder coughing in his 400 horsepower Chevrolet engine.

“It was the tires which won for us,” he noted, pointing to the wider tread he used. “The rubber is softer and gives us a better bite,” he explained.

Foyt is a man on the move — on and off the racetrack. He was honored at a Houston sports award dinner Saturday night, flew into Phoenix yesterday morning to drive the race, will take some test laps with the car today at the Phoenix International Raceway west of town, and then goes to Los Angeles where he plans to tear the engine apart and see if he can get it ticking properly.

A. J. ran his blue-and-white racer a nip-and-tuck second to Branson's mustard and red machine in the first 50 yesterday. He made a move to take over on the 42nd lap, but Branson outmaneuvered him in a five-car traffic jam on the backstretch and stayed ahead to the finish. Chuck Hulse ran third in this heat.

For the second heat cars still running were supplemented by slow qualifiers which replaced machines which had conked out in order to fill a field of 18 racers.

Foyt challenged Branson on the first lap, was repulsed, then took over the lead on the 10th and ran off with the show. He built his lead to 10 seconds by the 25th lap and when the field ran under the caution flag on the 36th to 39th lap because of a two-car spinout, came out with a 30-second lead.

That was the margin at the finish with Foyt first, Jim McElreath second and Tucson's Roger McCluskey third. Branson lost his place when he pitted on the 45th lap to replace a flat tire.