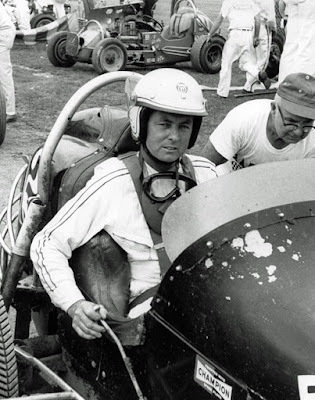 Woolley drove Hector Honore’s Black Deuce to it’s 424th feature win, qualifying for the main event via a consolation victory, which was the 682nd preliminary win for the historic car and its owner.

Woolley, who received injuries on four different occasions during competition last year, made a strong comeback in the first IMCA sprint car race of the year. He took the lead at the onset, and although pressed closely at times by Barton, managed to stay out front the entire distance.

The 47-year-old Barton hooked wheels with Woolley twice coming out of the fourth turn, brushing the outer wall both times.

Woolley received $605 for his competitive effort, plus an additional $50 for setting fast time in qualifying.

After the race Woolley mentioned, “I believe things will change for me this season. I started off badly here last year and wound up the rest of the year in a bad way. Maybe this good start means that I’ll get back to championship form. I know Hector would like to get it back.”