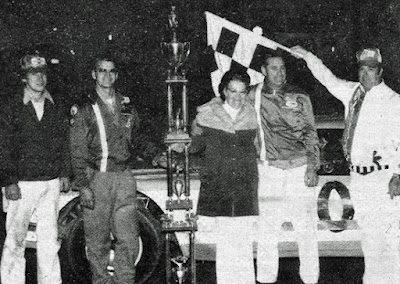 Blue Grass, Iowa (October 6, 1979) – Despite the cold weather, a good crowd turned out for the first annual Bernice Rogers Special on Saturday night at Hawkeye Speedway.

Ron Weedon of Pleasant Valley, Iowa, sped to victory in the 40-lap main event and not only picked up the checkered flag but a beautiful seven-foot-tall trophy for his efforts, which was presented to him by Bernice Rogers.