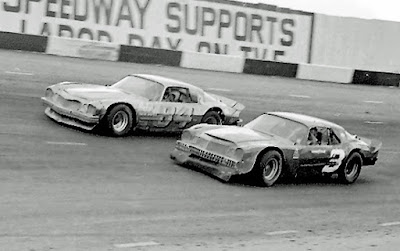 Nashville, Tenn. (October 16, 1977) – Mike Eddy of Midland, Mich., and a bunch of his Yankee buddies left some of the South’s top stock car drivers singing the outlaw blues on Saturday afternoon at Nashville Speedway.

Eddy held off a desperate charge by Larry Detjens of Wausau, Wis., to win the Marty Robbins World Open 500 stock car race before a shivering crowd of 18,000.

Eight of the top-10 finishers were from the so-called “outlaw” tracks, driving “outlaw” cars. The term simply means they are not sanctioned by NASCAR, which lays down the racing laws on most southern tracks.

Only Morgan Shepherd of Conover, N.C., and Steve Spencer of Nashville managed to represent NASCAR in the top-10. Shepherd finished sixth while Spencer was credited with ninth place.

Most of the big-name NASCAR drivers fell out early. Bobby Allison, Neil Bonnett and Dick Brooks were never a factor in the race. L.D. Ottinger, a two-time NASCAR late model sportsman national champion from Newport, Tenn., made a strong bid for the lead until dropping out with mechanical issues on lap 296.

Polesitter Bob Senneker of Dorr, Mich., the polesitter, finished third. Dick Trickle of Wisconsin Rapids, Wis., who had gone into the race as the country’s winningest short-track driver, had started second but ran into mechanical problems, lost 40 laps, and was never able to make a serious bid after that.

“Everything went perfectly for me all day,” said the 25-year-old Eddy, minutes after he zipped across the finish line ahead of Detjens. “The car (Camaro) ran strong from start to finish.”

Eddy’s car was dark green – a color considered taboo in stock car racing – and he occupied the #13 pit stall. “No,” he grinned. “I’m not a bit superstitious.”

Eddy said the race was the longest he had ever run but stated he wasn’t especially tired when it was over. The length of the race was supposed to be give NASCAR drivers, who are used to lengthy races, a slight edge – or at least equalize the advantage the outlaw drivers had by being accustomed to the lighter, faster cars driven in open competition races.

But even with country/western singer Webb Pierce singing the national anthem and Johnny Cash cheering in their corner, the good ‘ol boys couldn’t keep up.