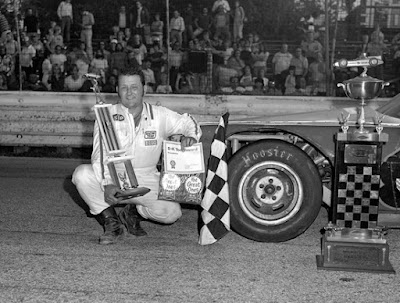 Schererville, Ind. (October 3, 1976) – Ray Young of Dolton, Ill., scored an impressive victory in the 15th annual Tony Bettenhausen Memorial 100 for late models Sunday afternoon at Illiana Motor Speedway, but there was controversy regarding the placing of the other 29 finishers in the event.

A good crowd turned out on a perfect day for the open competition program and saw some highly competitive racing on the vintage half-mile paved oval.

Due to confusion over the yellow flag rule, the official finish wasn’t posted for nearly an hour and a half after the vent was over, which resulted in two drivers being paid for second place.

Officials, after much deliberation, listed Jerry Kemperman of Blue Island, Ill., as the second-place finisher, although he pitted and was stalled on the track during one of the restarts. After protesting, Dave Roahrig of Bourbon, Ind., was also paid for second, but was listed third on the official finish sheet.

After it was all over, about the only thing that was clear was that Young had the fastest car on the track during the feature.

But let’s get back to the start…

Bob Strait of Flossmoor, Ill., was gridded front row outside and took a first-lap lead over Woody Church with Larry Knowlton of Kalamazoo, Mich., right behind.

Knowlton took over second on the second lap but could get no closer to Strait than eight car lengths.

Young, who earlier had set a record in winning the dash, started sixth and moved into third on the fourth lap with Larry Schuler of Lockport, Ill., right behind. Earlier Schuler had set fast time and won the fast heat.

Young pressure Knowlton and caught him on lap 14. Meanwhile, Strait slowed slightly and by lap 15 Young was on his rear bumper.

On the 16th go-round, Young caught Strait coming out turn two and quickly amassed a nine-car-length lead. Schuler moved around Strait for second place on lap 21.

The first caution flag waved on lap 22 and this is where the confusion started. According to a pre-race announcement, two laps were supposed to be counted while ran under the yellow.

The cars were stopped on the track under yellow before being restarted.

A pair of laps were run once racing restarted with Young holding off Schuler, but the yellow waved again when Strait hit the first turn wall. Johnny McPartlin stopped his car and rushed to Strait’s battered mount to see if he was alright, which he was. Strait’s car had to be removed with two wreckers.

During the caution period, confusion was compounded when starter Bob Adams stopped some of the cars on the track under the yellow and let others continue to circle the track. This was apparently done after the yellow flag laps were recorded.

Officially, racing resumed on lap 29 with Schuler trying everything to pass the veteran Young. Finally, on lap 38, Schuler got by on the inside in turn one.

Schuler’s lead, however, was very short, as the pair collided and locked bumpers in turn two, causing both to spin into the infield, handing over the top spot to Roahrig.

Young kept his ’76 Camaro’s engine running and returned to fourth place with damage to his left rear fender and rear bumper. Schuler was unable to get his “Junkyard Dog” Camaro running and needed a push truck, which put him a lap down.

The green flag returned on lap 43, according to officials, with Roahrig in the lead, followed by Knowlton and Young.

Young took second on lap 44 and passed Roahrig on the main stretch at the start of lap 49 for the lead.

Once ahead, Young was never challenged by any car on the same lap.

Schuler continued his battle to un-lap himself and passed Roahrig on lap 64, but Young was nearly a third of a lap ahead.

Kemperman gradually worked his way through the dwindling field and took third from Bob Schippers of Kalamazoo, Mich., on lap 93 and second from Roahrig on lap 99, the white flag lap.

Schippers crossed the finish line in fourth followed by Knowlton, Tom Musgrave, heat winner Al Schill and Bob Dotter. All were on the same lap with the leader. Schuler was listed as finishing ninth, one lap down, although he was on Young’s bumper at the checkered.
Results –