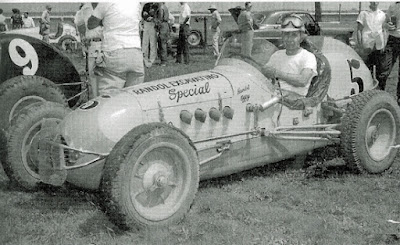 Shreveport, La. (October 25, 1953) - Vito Calia, a 42-year-old Italian driving star from Kansas City, served notice on the rest of the International Motor Contest Association big car field that he’ll be someone to watch for the 1954 season by capturing the final race of the season at the Louisiana State Fair on Sunday.

Vito Calia, who was born in Turin, Italy, but has done his racing in midgets car events in the Kansas City area for the past few years, drove a flawless 20 laps in the main event, setting a new track record in the process.

Calia took the lead from Saturday’s winner, Bobby Grim of Indianapolis, at the start and was never headed. His time of 8 minutes and 37.06 seconds for the 10-mile distance as nearly half a minute faster than the previous mark.

A near-capacity crowd of 6,100 fans saw Grim finish second in two events. This was a reversal of form from his efforts of the previous day when he won three events and set two records.

For Calia, who finished second on Saturday, it was his second feature win of the season. He powered his Randol Offenhauser to victory two weeks ago at the Alabama State Fair in Birmingham. Until six weeks ago, he had never driven a big car. The form which enabled him to capture six midget driving crowns in the tough Kansas City circuit has finally shone through.

Grim’s runner-up finish in the Bardahl Offenhauser kept him from overtaking Bob Slater of Redfield, Kan., in the race for the National Speedways point championship. Slater, whose own Offenhauser was out of action for the second day with valve trouble, protected his margin by taking over Jimmy Campbell’s car for the feature race and finishing fifth, good for 100 points.

Campbell, the flying farmer from Bates City, Mo., turned his Offy over to Slater after he had safeguarded third place in the season’s rankings with a victory in the second heat and match race. Campbell won the National Speedways point battle last year.

Calia edged out another former midget ace, Don Branson of Champaign, Ill., in the opening heat race. Then, Campbell topped Wayne Selzer of Omaha in the second heat. Herschel Wagner of Hickman Hills, Mo., outlasted Grim in the third heat with Campbell whipping Branson and Calia in the 3-lap trophy dash.

The Australian Pursuit saw 24-year-old Don Hutchinson of Kansas City getting his first big car victory of his career, squeezing past Fritz Tegtmeier of Elgin, Ill., in the 10-lap race.

Branson wound up third in the feature with Selzer taking fourth. The Omaha speedster got into the lineup at the last minute, after completing repairs on a broken radius rod. He started in the 14th position but aggressively moved up through the field to finish ahead of Slater.