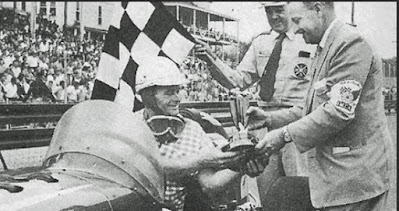 It was the hustler’s third consecutive win after winning two straight features at the Tennessee State Fair two weeks earlier, and again, it was on a slippery oval drenched with five days of moisture.

Amick took the lead in the 20-lap Dixie Sweepstakes feature on lap 11 and never relinquished it. He finished 50 yards ahead of second-place Don Carr of St. Petersburg, Fla.

International Motor Contest Association champion Bobby Grim of Indianapolis had the lead until Amick passed Grim, who would slip back to fifth place before rebounding and finishing third.

But Grim had his glory, setting a one-lap record in qualifying with a time of 23.41 seconds on the half-mile paved oval.