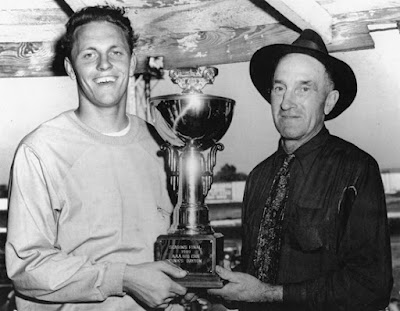 
Dayton, Ohio (October 2, 1949) – Troy Ruttman, the 22-year-old sensation from Ontario, Calif., carried away all the gold and glory at the year’s final AAA big car program at Frank Funk’s Dayton Speedway on Sunday afternoon, when he won the feature event, the Gold Cup, and set a new track record.

Ruttman captured the $4,000 race in the very good time of 7 minutes and 19.01 seconds, being pushed all the way by veteran “Doc” Shanebrook of LaPorte, Ind.

Shanebrook made a determined bid to overhaul the leader on the final lap and missed by only two lengths of accomplishing that feat, giving a crowd of 7,000 quite the thrill.

The youthful blonde speedster was presented the Funk Gold Cup for his victory, besides carrying away the major portion of the purse. He was also presented a $100 bonus for bettering the track record in time trials.

Jackie Holmes of Indianapolis trailed Ruttman and Shanebrook to the checkered flag, coming all the way from seventh position. Pee Wee Northern was fourth and Billy Earl was fifth.

Ruttman grabbed the lead at the outset and with the exception of laps 15 and 20, held a commanding lead. Shanebrook made his bid on both of those laps and came very near to passing Ruttman on both occasions.

It was strictly a two-man race with Ruttman copping his third win of the season at the half-mile track.