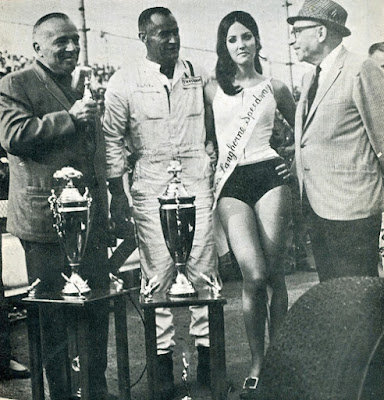 Middletown Township, Penn. (October 13, 1968) – A crowd of more than 40,000 watched Dutch Hoag of Bath, N.Y., streak to his fifth career victory in the National Open Championship for modified stock cars.

Hoag started in the sixth position after setting a track record of 113.332 miles per hour in Saturday’s time trials. He took the lead for keeps on lap 99.

Hoag drove a 1936 Chevrolet with a 427 cubic inch engine. Only once did he experience trouble. His right front tire began to blister early on in the contest, forcing him to make an unscheduled pit stop on lap 51.

Bobby Gerhart of Lebanon, Penn., was second, more than a lap behind Hoag at the finish.