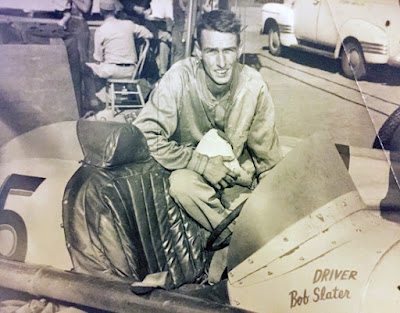 Slater’s triumph came after both Missouri contenders had smashed the official track record of 25.03 seconds set by Bobby Grim of Indianapolis in 1951. Slater shaved this mark to 24.50 seconds in his yellow Offenhauser and Jimmy Campbell of Bates City, Mo., also wheeling an Offy, successfully lowered the track record to a sizzling 24.19 seconds during his qualifying efforts.

Slater’s feature victory raised his season total to 11 for the year but he Kansas City star, a newcomer to Shreveport fans, still trails Campbell and Grim in the National Speedways circuit point standings.

Eight Offenhauser-powered mounts rolled out Saturday afternoon and the accelerated action was in keeping with this record entry of powerful racing engines.

Slater’s triumph in the 15-lap main event was registered only after four other contenders had challenged him fiercely for the lead. Grim, Jud Larson of Oklahoma City, Don Branson of Champaign, Ill., and Bill Holland of Reading, Penn., had all traveled several laps in second place before the checkered flag was dropped.

Slater served notice of his winning intentions in the 5-lap second race, when he leadfooted his way to the finish ahead of a six-car field that included Larson and Stan Callaway of Miami, Fla.