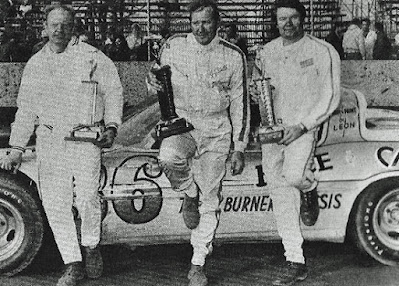 Luxemburg, Wis. (October 12, 1975) – Racing’s colorful J.J. Smith wrapped up the first annual Autumn Countdown Classic on a blustery fall afternoon to cap off what he described as his most successful season ever in 15 years of stock car racing.

Starting in the sixth row, the streaking Smith lost little time in “picking off” the field, moved to the lead on lap 6, and stayed out front the rest of the way until the conclusion of the 40-lap late model championship race.

“The track was in excellent condition, giving me plenty of bite,” related a smiling Smith, who was mobbed by autograph seekers after his smashing victory.

Hundreds of hearty fans braved miserably cold, windy weather to see Smith do his thing and he didn’t disappoint them. Maneuvering his 1975 Camaro with all the skill and precision that brought him national honors two weeks hence at the National Clay Track Championships, Smith made it look easy as he passed car after car on the outside on both curves and the straightaways. Only a series of restarts due to other driver’s mistakes prevented him from making it a complete rout.

As it turned out, Smith’s brother-in-law, Dave Valentyne of Kimberly, fought his way to a respectable second place, all the way from an original seeding in the consolation bracket. By taking second in that event, Valentyne qualified to start at the rear of the field for the title race.

Valentyne then put on quite the show in his wailing Mustang but Smith was not to be denied. Stu Nitzke of Berlin annexed third place despite spinning out early on in the race, while hometown favorite Irv Ettien drove a steady race to take fourth.

Omro’s Terry Baldy, the late model point champion there, failed to finish in the championship race due to damage on his car.