1965 – Branson Breezes to Victory at Eldora 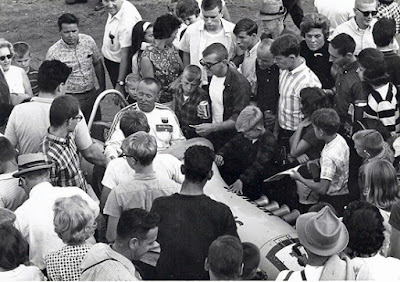 USAC sprint car winner Don Branson is surrounded by well-wishers after his triumph at Eldora.

With 5,000 fans on hand, the final racing show at the Darke County half-mile saw Branson clip five seconds off the track record in winning only his fourth feature of the season.

The division's point leader, Greg Weld of Kansas City, picked up 16 points by finishing fourth but his lead dwindled to six points over Rutherford, 481.5 – 475. Rutherford claimed 24 points for his second-place finish.

“I feel wonderful about winning,” said Branson, who moved into fifth place in the standings. “I almost forgot how it felt to win.”

The Illinois veteran has won only four races this season, two in championship (Indy-type cars) and two in sprints. The victory was also his first at Eldora in eight attempts.

Rutherford’s right rear tire was worn out, and his main concern was finishing the race. “I might have caught Branson, but the tires were going, and my engine was running hot, so I was content to stay in second.”

In time trials, Rutherford toured the oval in a record-breaking 17.92 seconds or 100.466 miles per hour. That passed the previous low of 18.17 seconds set last year by Jud Larson.