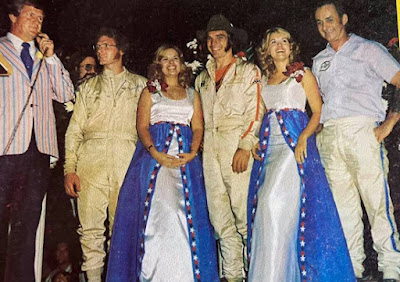 The 50-lap main event was a near instant replay of last year’s 1-2 finish when Albuquerque’s Buddy Taylor took runner-up honors.

The Western was billed as “the world series of sprint car racing” – and it lived up to that and more.

Like last year, Opperman started in the fifth row, waited until late before making his move to the front of the pack.

Taylor, perhaps driving the finest race of his career, led the first 39 laps, using nearly every trick in his extensive bag to hold back both Opperman and Knoxville Nationals champion Kenny Weld.

At one point, Opperman, Taylor and Weld were going three-abreast through the turns.

But once Opperman pulled inside of Taylor going into turn two, he gradually began lengthening his lead to about 30 yards at the finish.

Taylor managed to hold off Weld by less than a car length to finish second.

Fourth went to Billy Shuman of Tempe, Ariz., who never did contend for the lead but beat more than his fair share of drivers.

Fifth was Darrell Dockery, who stayed close until the late going after starting in the front row next to Weld. Dick Sutcliffe of Greenwood, Mo., finished sixth, a lap down.

For Opperman, it was his 40th feature win of the season. The $10,000 or so he earned in purse and accessory prizes boosted him to over $60,00 in earnings for the season.

The race started out like it would never finish.

After Taylor brilliantly grabbed the lead from his second row starting spot, before the first lap was even completed, 14 cars crunched, flipped and spun coming out of turn two on lap 3. The smashup delayed the race for 25 minutes.

One of the pre-race favorites, former winner Jerry McClung, lost a bearing in warmups and had to scratch from the main.