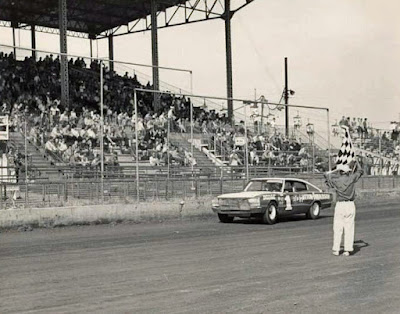 Shreveport, La. (October 22, 1967) – Ernie Derr, a man who cut his teeth on piston rings, continued his bid for an unprecedented eighth International Motor Contest Association stock car championship by nosing out Ramo Stott in the 100-lap feature at the Louisiana State Fair on Sunday afternoon.

Derr, of Keokuk, Iowa, the only leader through the first half of the main event, relinquished the top spot to Stott when he spun out on lap 51.

But Derr commandeered the lead once again when only two and a half miles remained in the endurance test.

It was strictly Derr and Stott all the way as the other 20 competitors resembled a circus carousel - going round and round but never showing any forward gain.

Virtually assured of his eighth stock car crown, Derr only needs a mild showing next weekend in the final two State Fair programs. Derr’s seven national championships have him tied with the immortal Gus Schrader, who also won seven titles in the sprint car division.

Stott, of the famed Keokuk Komets, and Saturday’s feature winner, battled Derr down to the wire before losing by six car lengths. Ernie was powering a 1967 Dodge Charger and Stott a ’67 Plymouth.

Five laps back, Butch Hall of Russell, Minn., outdueled Ralph Dyer of Shreveport for third place honors. Dyer came out retirement for the classic and was wheeling Derr’s backup car.

Lenny Funk of Otis, Kan., fourth in the national standings, blew his engine in prelims and piloted Stott’s backup Plymouth in the 100-lapper. He would finish 16th.

The race, which was slowed by two yellow flags, found Derr out front at the start. He won the pole position with a time of 24.74 seconds in the one-lap qualifying runs.

A spinout on lap 51 by Der gave Stott his big break of the day. He had loomed behind Derr several car lengths throughout the first half of the 50-miler.

Ramo stayed in the lead for 39 circuits before Derr, who was steadily closing the gap created by his miscue, regained leadership. Derr was riding Ramo’s bumper the final three miles, and on the 91st lap, Ramo skidded high in the curve, giving the champ the break he needed.