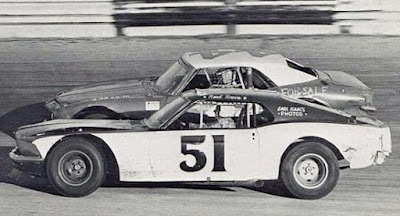 Neal Sceva (51) and Joe Ruttman (44) duel in the closing laps of the Midwest 300. Sceva would take the win while Ruttman got suspended for rough driving.

Ironically, Troy’s younger brother, Joe Ruttman of Dearborn, Mich., was very much involved in Sunday’s spectacular action. But he was not a popular figure by any means.

Ruttman, in fact, was dropped from first place to eight place by American Speed Association officials who ruled that he merited a five-lap penalty for his conduct in the bizarre climax of the championship feature, which was the last of the three 100-lap races.

Ruttman was also suspended from ASA competition for one year, and the ruling cost him $1,100 in prize money. Neal Sceva of Urbana, Ohio, got the victory and the $1,565 first place prize money.

Ruttman took the early lead but dueled with defending race champion John Anderson of Detroit, who passed him on the 17th lap, then relinquished the lead back to Ruttman on lap 47.

When a blown tire took Anderson out of the chase 13 laps later, Ruttman settled into a comfortable lead over Dave Sorg. But Sceva, who had been fifth most of the way, began to mount a furious charge that swept him past Sorg and into second place on lap 74.

However, he was still one-third of a lap behind Ruttman.

Somehow, Sceva made up the formidable margin over the final 25 circuits. With two laps to go, he drew even with Ruttman and was about to complete a passing maneuver when Ruttman swerved over and blocked him.

Fenders bumping, the two drivers sped into the second turn on the final lap and Sceva began to pass Ruttman once again. Again, Ruttman blocked him.

Sparks flew as the cars, now side-by-side, bounced off of each other. Then on the straightaway heading for the checkered flag, they collided, spun, and crashed into the inner guardrail.

With parts flying off, the pair crossed the finish line - one sideways, one backwards – Ruttman first, Sceva second.

Ruttman was declared guilty of “driving in an unsportsmanlike manner.”