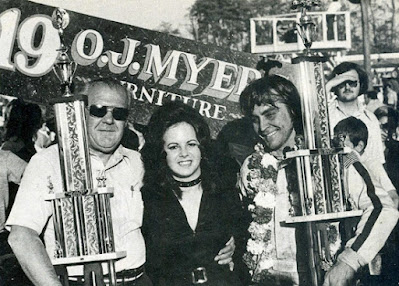 Mechanicsburg, Penn. (October 6, 1974) – When Steve Smith scored his initial victory at Williams Grove a couple of weeks ago, there were a few snickers in the crowd because Kenny Weld and Jan Opperman were up in New York running with the modifieds.

But Weld was back on the scene and so was Opperman and just about everyone else who is anybody in super-sprint competition when The Grove held its annual National Open on Sunday afternoon and right there in victory lane in front of 11,500 cheering fans was none other than that same Steve Smith kid.

Smith capped off his finest season of a promising career by winning the 150-lap encounter over Bobby Allen in a 1-2 finish for Hanover, Penn., based drivers.

Smith brought a big smile to the face of sponsor O.J. Myers when he pushed the O.J. #19 into the lead on lap 85, then held off the best that Paul Pitzer had to offer and then beat his old buddy from Florida, Allen, by 2.5 seconds at the checkered.

Allen slipped into the runner-up position after Pitzer lost control of his Weikert #29X with only nine laps to go in the contest.

Pitzer fell all the way back to fourth as Smokey Snellbaker claimed third place even though he didn’t have any brakes for the late going. Lynn Paxton rounded out the top five finishers.

Smith’s victory was worth $2,500. He also picked up $660 in lap money and added $150 to his winnings for having third fastest time in qualifying on Saturday.

As for Weld, winner of this event the past three years and logical favorite to repeat, he gave it his best only to have the rear end of his Weikert #29 let go on the 52nd circuit. He wound up being credited with 31st place out of the 35-car field.

Weld started on the outside of Paxton on the front row as a result of time trials in which Paxton set quick time of 24.34 seconds and Weld was clocked in 24.50 seconds.

Except for a brief period on the first go-round, Paxton led right up to the 75-lap fuel-up period, and then kept the upper hand through 10 more laps when racing resumed. It was then that Smith, who had a 24.62 second time trials, took command moving down the backstretch and Pitzer, running with tires planned for use on Weld’s car, dove past Paxton in the third turn.

Pitzer gave Smith all he could handle before his slight miscue on lap 141 cost him dearly.

Smith noted after the race that he was willing to sit back and wait for his opportunity.

“We weren’t running well for the first 75 laps,” he remarked. “But the crew really put it together for the last 75. I was praying during those last 10 laps that the car would stay together, and it sure did.”