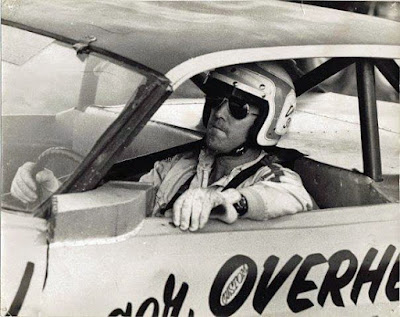 Dave Sorg waits to qualify during the Dri-Powr 400 at Winchester Speedway. Sorg would go on to win the inaugural event.

Sorg, a veteran from Fort Wayne, Ind., who ran the first part of the season with the United State Auto Club, put his Ford Fairlane across the finish line five laps ahead of runner-up Irv Janey of Cedar Rapids, Iowa.

A crowd of more than 3,500 fans watched the longest race in Winchester Speedway history. It was the biggest turnout at a Winchester event in recent years.

John Sommerville of Louisville, Ky., was third in a 1969 Chevelle after trailing oil smoke for almost the entire 400 circuits.

Fourth went to Jerry Norris, also of Louisville, in a 1968 Chevelle, and fifth went to USAC stock car driver Jay Behimer of Potomac, Ill., in a 1968 Dodge Charger.

The fastest qualifier was Ron North of Huntington, Ind., who set a track record for stock cars with a lap of 18.98 seconds. The old mark was 19.04 seconds set earlier this season by Jim Blount of Anderson, Ind.

The yellow flag flew 16 times for 125 laps during the running of the 400-lap race for late model stock cars. There were no injuries. Most of the leaders were able to steer clear of trouble, but one spin did eliminate one of Sorg’s chief competitors.

Jim Blount was involved in a five-car tangle on the 123rd lap that completely demolished his 1969 Chevelle. Although Blount, a pre-race favorite, was uninjured, his car was eliminated from further competition.

At the time of the spin, Blount was running a close second to Sorg after leading 49 of the first 122 laps. Sorg had passed Blount on lap 110 and remained on top for the final 290 laps to take home the $1,500 first-place money.

Blount took the lead from fast qualifier Ron North on the first lap and held it for three until North pushed his 1969 Chevelle back into the lead on the fourth trip around the high-banked half-mile. North led for four more until Blount once again moved to the front on lap 8.

Blount held the top spot until lap 38 when Homer Newland of Detroit, Mich., roared from third-place in traffic to pass both Blount and Sorg. The ARCA veteran saw his lead last only four laps before the engine in his 1969 Chevelle blow.

Sorg, who had gotten by Blount in heavy traffic, resumed the lead and held it until lap 88 when Blount caught him in traffic.