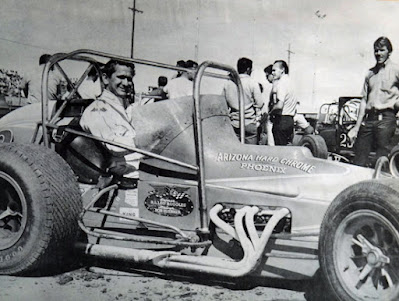 Phoenix, Ariz. (October 11, 1969) – It was “Home Sweet Home” for three of Arizona’s finest at the $12,500 Western United States Championships for sprint cars before a packed house at Manzanita Speedway on Saturday night.

Bob Huebner started on the pole and led from start to finish in the 50-lap headliner, although feeling pressure from runner-up Bob Cleburg.

Jerry McClung grabbed third, right behind Cleburg. Both had to come from the rear of the talented field.

Huebner finished dead last in last year’s Western but took home the $2,200 winner’s share this time around, in addition to lap money and accessories.

The Tucson flash had the lead virtually from the first turn but Dick Sutcliffe of Greenwood, Mo., kept the pressure on, staying two or three car lengths behind until the 34th circuit.

Sutcliffe grazed the wall coming out of turn two and fell back to fourth with McClung taking second and Cleburg inheriting third place.

The slight mishap eventually caused Sutcliffe to exit the race on lap 39.

Then, on the 40th lap, Cleburg slipped around McClung and the two Arizonians dueled for the remaining 10 laps.

Huebner, however, never wavered despite four caution flags which allowed the rest of the field to catch up.

The Tucson driver finished about four car lengths in front of Cleburg, the inaugural winner of the event.

The only serious accident came on lap 6 when Jan Opperman of Lincoln, Neb., lost control coming out of turn four and was hit broadside. Opperman was able to walk away from the accident.