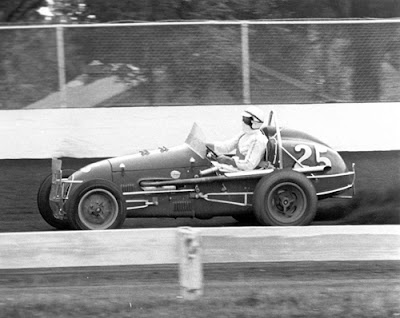 The 26-year-old, whose triumph Friday was regarded as somewhat a fluke, again beat International Motor Contest Association’s top-ranked Pete Folse – this time by a good 200-yard margin – over the 10-mile route.

Unlike Friday, when Leep passed Folse on the final lap, Leep overhauled his Offenhauser-powered rival on the third lap and was never headed.

Folse, from Tampa, Fla., was no match for Leep’s Chevrolet-powered outfit on the asphalt-like turns. Jerry Blundy of Galesburg, Ill., was third and Herschel Wagner of Hickman Hills, Mo., finished fourth.

Up to the consolation, open to previous non-money winners, not a single Offenhauser-powered machine won Chevy plants won the first four events.

Leep earned $700 for his main event win plus $50 for the fastest preliminary heat and another $40 for whipping Folse in the trophy dash.

Two other drivers besides Folse had frustrating afternoons.

Arnie Knepper of Belleville, Ill., was set back to fifth in the feature after he appeared to finish third, because of passing on a yellow flag on lap 14.

A lap later, Bill Holland, one-time Indianapolis 500 winner, who switched from the Mocca Offy to the Mueller Olds Sunday, pulled into the pits and never came back.