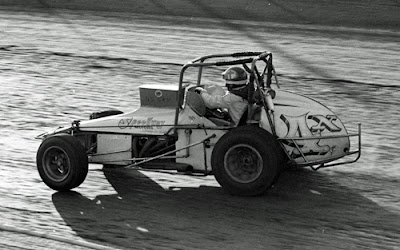 “This is the kind of track I like,” Opperman said, referring to the tacky condition of the half-mile oval. “We had the right chassis combination tonight.”

Several caution periods allowed the field to close on the Indianapolis 500 veteran during the race.

However, he was able to pull away from the competition each time by being the only driver able to use the entire track to his advantage.

Finishing second was Bubby Jones of Danville, Ill., followed by Bill Utz of Sedalia, Mo., and Larry Kirkpatrick of Wood River, Ill. Kirkpatrick had been running in third place for most of the race before slowing on the backstretch during the final lap, allowing Utz to pass.

“He ran out of gas,” commented Kirkpatrick’s mechanic, Bob Trostle of Des Moines, “When he got bumped earlier by another car, the gas tank tilted, and the engine couldn’t pull the last gallon and a half.”

Twenty-seven drivers from seven states qualified for the program and 20 cars started the feature event.